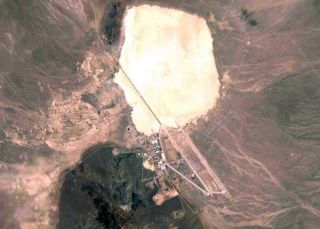 An aerial view of Area 51 and Groom Lake in Nevada.
(Image: © Public domain)

In her race to secure the Democratic nomination for president, Hillary Clinton has recently drawn support from an unusual voter base — alien enthusiasts. First in a radio interview, then again on "Jimmy Kimmel Live," Clinton expressed interest in making public files about UFOs and the mysterious Nevada site called Area 51.

"I would like us to go into those files and hopefully make as much of that public as possible. If there's nothing there, let's tell people there's nothing there," said Clinton, speaking with Kimmel. She confirmed that her husband, former President Bill Clinton, had also gone looking for extraterrestrial information during his presidency and came up empty.

"If anyone is expecting to find flying saucers or dead aliens or any of that stuff, I think they'll be very disappointed," said Jeffrey T. Richelson, senior fellow with the National Security Archive at George Washington University, of this hypothetical release, in an interview with Live Science.

The National Security Archive, a nonprofit founded in 1985 to uncover and archive government documents and release them to the public, holds the second-largest collection of declassified U.S. files (the federal government has the largest repository).

As part of the archive's efforts, Richelson edited a release of declassified Area 51 files in 2013 that included more than 60 documents. Among many other activities, these files shed some light on Area 51's role in the development of stealth programs and the test flights of covertly obtained Soviet MiG fighter jets during the Cold War.

Located in Nevada about 80 miles (130 kilometers) northwest of Las Vegas, Area 51 is a military base that is restricted to the public. Its official name is the Nevada Test and Training Range, which is part of the Edwards Air Force Base.

Over the years, people who have worked (and claimed to have worked) at Area 51 have added fuel to the UFO fire with claims of working with aliens or having access to alien technology gathered from spacecraft crash sites. [7 Huge Misconceptions About Aliens]

"It's important to separate [what really happened there] from what most people think of when they think of Area 51: that that's where there is alien technology, a crash that had occurred somewhere that had been picked up by the military and kept there in a super-secret base, and all that kind of stuff," said Roger D. Launius, associate director for collections and curatorial affairs at the National Air and Space Museum. "That piece of it is a folklore that has no bearing [on] and no relationship to any reality whatsoever."

The scoop on spy planes

What is real, added Launius, is the facility's involvement in highly classified aerospace research and development.

Area 51's connection to experimental aircraft may be a reason why people have connected it with extraterrestrial cover-ups. After all, it is a well-known yet super-secret base that has many strange aircraft fly in and out of it, Richelson said. By his estimation, further details about the different aircraft programs that have connections to Area 51 would be the most likely results of any actions Clinton would take to declassify documents about the facility.

Specifically, Richelson theorized that further declassification of Area 51 documents could fill us in on what has gone on there after the U-2, OXCART (the successor to the U-2), F-117 and SR-71 Blackbird secret aircraft projects, which were featured in the 2013 document release. It's a challenge to theorize about the contents of secret documents, but Richelson's best guesses were that the public might gain additional information about stealth-drone programs, such as the RQ-170 and RQ-180, and other exotic aircraft that were tested but never produced in significant numbers.

One aircraft that he said we could learn more about is the Northrop Tacit Blue, a battlefield surveillance aircraft that, according to the National Museum of the U.S. Air Force, "tested advanced radar sensors and new ideas in stealth technology." This unusual plane, with curves reminiscent of a to-go box, flew 135 times before the program ended in 1985.

Regardless of whether people are invested in extraterrestrial revelations, Launius said there is an important point to be made about Clinton's declassification discussions. "I would like to think that, whoever the president is — whether it's Mrs. Clinton or it's Mr. Trump, or it's somebody else, or the current president as well — that every piece of classified information that exists inside the federal government that is no longer necessary for our national security, should be declassified," he said.

While he is in favor of openness in regard to government records, Launius also notes that declassification does require significant effort and may take several years to complete, even with a presidential push.