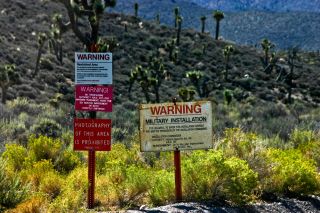 Newly declassified CIA documents reveal the history of Nevada's Area 51. The area was never home to aliens or UFOs, but was instead a super secret site for testing spy planes such as the U-2.

The document, "The Central Intelligence Agency and Overhead Reconnaissance: the U-2 and Oxcart Programs," was released recently in response to a Freedom of Information Act Request made by George Washington University in 2005.

Area 51, a desert tract near Groom Lake, about 80 miles northwest of Las Vegas, was first chosen by officials searching for a place to test planes and train pilots flying the U-2 in 1955.  The airstrip by a salt flat was used for the U-2 plane, as well as its successors, the Lockheed A-12 Oxcart, the D-21 Tagboard and the F-117 Stealth Fighter. The document doesn't reveal what's been done at the base since 1974.

Area 51 buffs are unlikely to be surprised by the new disclosure: Many of these facts had been suspected for years and government officials have even mentioned the area offhandedly on occasion. However, this is the first time Area 51 is explicitly mentioned in a publicly available government document.