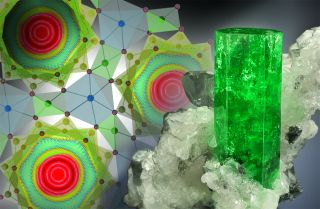 A strange new behavior of water molecules has been observed inside crystals of beryl, a type of emerald, caused by bizarre quantum-mechanical effects that let the water molecules face six different directions at the same time.

Under normal conditions, the two hydrogen atoms in each water molecule are arranged around the oxygen atom in an open "V" shape, sometimes compared to a boomerang or Mickey Mouse ears.

But in a new experiment, scientists have found that hydrogen atoms of some water molecules trapped in the crystal structure of the mineral beryl become "smeared out" into a six-sided ring. [The Surprisingly Strange Physics of Water]

The ring shape is caused by the "quantum tunneling" of the molecules, a phenomenon that lets subatomic particles pass or “tunnel” through seemingly-impossible physical barriers.

In this scenario, the atoms of the water molecule are "delocalized" among six possible directions inside natural hexagonal pores or channels that run though the crystal structure of the beryl, so it partially exist in all six positions at the same time, the researchers said.

Scientists from Oak Ridge National Laboratory (ORNL) in Tennessee and the Rutherford Appleton Laboratory in the United Kingdom observed the newly discovered effect in blue aquamarine crystals purchased at a gem show. Blue aquamarine; green and red emerald; pink morganite; gold heliodor; and clear goshenite gemstones are all varieties of the mineral beryl (beryllium aluminum cyclosilicate) with traces of other chemicals that give the crystals their characteristic colors.

"We chose beryl because it has a crystal structure that has channels in it, about 5 angstroms [5 ten-millionths of a millimeter] across — a little bit bigger than a water molecule — and it's known from spectroscopic data that natural beryls have water in them," said Larry Anovitz, a geochemist at ORNL and one of the authors of a paper on the new research. "We already know from lots of other studies that as you put water in smaller and smaller pores it starts to affect the properties of the water — the freezing point drops, the density changes, all sorts of things. So, we wanted to know, if you made that pore so small that you only can get a single molecule of water into it, what would that would do to the properties of water?"

What happened next was unexpected, Anovitz told Live Science.

"We knew that natural beryl would have water in these channels in the structure, so we could go and look at that and see what the properties were," he said. "But we didn't know that the properties would turn out to be so strange when we looked." [Sinister Sparkle Gallery: 13 Mysterious and Cursed Gemstones]

At ORNL's Spallation Neutron Source facility, after cooling the beryl crystals to very low temperatures, the scientists measured the lowest-energy states of the atoms in the trapped water molecules with neutron-scattering experiments, which use a beam of subatomic neutron particles to chart the motion of atoms and molecules.

Interactions between water molecules and the walls of the hexagonal channels usually force the water into the center of the channel, with both hydrogen "mouse ears" facing the same one of the six sides.

In their lowest energy states, the water molecules do not have enough energy to rotate to one of the adjacent positions.

But in the areas where the channels narrow so just a single water molecule can fit, the atoms in the water molecule can "tunnel" through the energy barrier that prevents rotation. And the new experiments reveal that the molecules were forming a "double-top" shape, with the proton nucleus of each hydrogen atom delocalizing into a six-sided ring around the central oxygen atom, the researchers said.

Alexander Kolesnikov, a physicist at ORNL and the lead author of the new paper, said additional studies at the Rutherford Appleton Laboratory had determined that the kinetic energy of the hydrogen protons in the six-sided water molecules was about 30 percent lower than in molecules of water in its normal state, or "bulk water."

"That is a direct indication that this is a quantum property due to the tunneling of water in this beryl channel," Kolesnikov told Live Science. "In classical terms, the kinetic energy would be expected to be something comparable to all other bulk water.

"This is not a new phase of water [like ice or steam] — it's not completely in the gas phase, but it's close to a gas phase," he added. "But at low temperatures, due to quantum delocalization, the kinetic energy of the protons significantly decreases, and they propagate under this [energy] barrier. So, I would say this is kind of a new state of the water molecule."

Anovitz said that quantum tunneling was known to occur in other substances but that the effect was usually limited to subatomic particles rather than larger particles like water molecules.

Quantum tunneling was also known to take place among hydrogen atoms in methyl-group molecules, which are arranged in a triangular pyramid shape around a carbon atom, but the molecules looked the same shape after the tunneling transition, he said.

"With water, when it's moving around this six-fold axis in the beryl channel, it doesn't look the same anymore — and that’s something that's never been seen before," Anovitz said.

The findings were published April 22 in the journal Physical Review Letters.