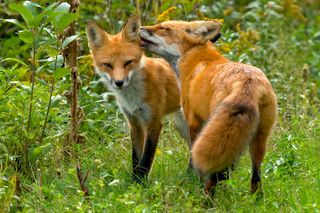 Spring is in the air for this pair of red foxes.
(Image: © Paul Reeves Photography / Shutterstock.com)

The subject of numerous fables and folklore, red foxes are synonymous with sly and cunning behavior. But just how cunning are these canids when it comes to chasing tail?

Red foxes (Vulpes vulpes) are found throughout the Northern Hemisphere and Australia. Despite this huge range, the mating behaviors of different red fox populations may be the same, according to Graziella Iossa, a zoologist at the University of Lincoln in the United Kingdom.

However, the social system of these carnivores varies depending on the environment.

That is, red foxes often live in mating pairs that share a territory but forage alone. If key resources such as food, shelter and den sites are just right, they may live in small social groups with a dominant mating pair — the group shares a territory and hunts alone, but the subordinate members help the mating pair raise their cubs. [See Photos of the World's Cutest Baby Animals]

Mating among red foxes typically takes place in the spring, and adults locate one another through different communicative cues.

"Foxes find mates via vocalizations, and also utilize scent marking to communicate," Iossa told Live Science. "Although, we are unsure of any role of scent marking with regards to mate searching."

If two male red foxes, called dog foxes, incidentally meet up while searching for mates, fights can be violent and dangerous. But red foxes are territorial animals, so encounters between dog foxes aren't likely to happen very often.

"Territories are there to signal to other foxes, 'Move out, that's my space!'" Iossa said.

It's unclear how, exactly, red foxes choose their mates or what's involved in sexual selection. The animals don't engage in any courtship dances or displays, Iossa said. Research suggests that large dominant dog foxes copulate more than smaller males, but scientists don't know whether females, called vixens, have a choice in their mates, she added.

Like other canids, copulation occurs when the dog fox mounts the vixen from behind. The penis only becomes erect after the dog fox penetrates the vixen; an erectile tissue called the bulbus glandis expands while the vixen's vagina contracts, locking the penis in place. [The 7 Weirdest Animal Penises]

The dog fox will then lift a leg and swing it over the vixen's back so that the pair's hind ends are touching. This copulatory lock, or copulatory tie, can last for quite a while, sometimes up to half an hour or more, and ends when the dog fox ejaculates and his erectile tissue no longer swells.

During copulation, and throughout the two-week mating season in general, vixens may give off human-like high-pitched vocalizations called "screams."

Dominant mating pairs tend to stay together for life, and the dog fox guards his partner throughout the mating season to try to prevent any other males from mating with her. But this doesn't mean the "monogamous" animals have any code of fidelity.

In fact, dog foxes are known to frequently seek out other nearby sexual partners, who are generally already paired, Iossa said. But research suggests that large males are more likely to seek out extra partners, possibly because this unfaithfulness is energetically costly.