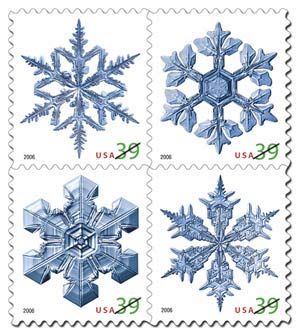 Through rain and sleet and dead of night and all that, your letters next winter can be delivered bearing snowflakes artfully photographed by a physicist who weathers those same storms to study nature's crystal magic.

Starting in October, the U.S. Postal Service will issue a set of four stamps featuring pictures of snowflakes taken by Kenneth Libbrecht, a professor of physics at the California Institute of Technology.

For years, Libbrecht has been studying the physics of snowflakes, looking at the different patterns of crystal growth and snowflake formation.

Snowflakes generally take one of seven basic forms. For example, stellar, or starlike, snowflakes usually grow six primary branches that support arms, which often develop thin plates of ice at the ends. Bitter-cold conditions create crystals with more facets. The most symmetrical snowflakes occur during light snowfalls when there is cold weather and little wind. If the air is warmer, crystals tend to stick together to form less symmetrical snowflakes, or they can take on a needlelike shape. In higher humidity, snowflakes may branch more, making them dendritic, or plantlike, in appearance.

The Holiday Snowflakes stamps are photographs of two basic snowflake patterns by physicist Kenneth Libbrecht. They are stellar dendrites, which form branching treelike arms, and sectored plates, which as their name suggests, form platelike arms.

Falling from thousands of feet, these intricate ice crystals commonly begin as a piece of dust tumbling through the clouds. Gathering water molecules, they blossom into crystal forms in endlessly different patterns because of the constantly changing conditions of the atmosphere.

"I'm trying to understand the dynamics of how crystals grow, all the way down to the molecular level," Libbrecht said.  "This is a very complicated problem, and I've been looking at ice as a particularly interesting case study."

Snowflakes are nothing more than ice, but the forms a single flake can take are dizzyingly complex. A single crystal of ice is known as a snow crystal. And one or more snow crystals stuck together make a snowflake.

There is, as you've heard, endless possibilities for how they stick together.

When Libbrecht started making snowflakes in the laboratory, he took microscopic photographs in order to be able to study the basic physics of each flake. In 2001, he started capturing images of natural snowflakes.

"Fairbanks sometimes offers some unusual crystal types, because it's so cold," Libbrecht said. "Warmer climates, for example, in New York State and the vicinity, tend to produce less spectacular crystals."

"I visit the frozen North and wait for snow to fall," Libbrecht said in a recent email interview. "I'm in northern Ontario right now."

Since ice is mostly clear, the flakes have to be lit properly to reveal their beauty.

"I use different types of colored lights shining through the crystals, so the ice structures act like complex lenses to refract the light in different ways. The better the lighting, the more interesting is the final photograph." He has to work quickly, using a paintbrush to place a flake into his portable studio for the shoot. When flakes have fallen, they stop growing and within minutes they typically lose their sharp edges and become less interesting.

The pictures have helped Libbrecht describe a growth instability in snowflakes that other researchers had missed. By applying high voltage to a growing snow crystal in the lab, Libbrecht is able to analyze unique growth mechanisms, especially on very small scales.

"These instabilities are new and important for understanding how crystals grow, but they're hard to explain," Libbrecht told LiveScience.

Nonetheless, the knowledge can be applied in making semiconductors, solid materials whose electrical conductivity operates many electronic gadgets. Semiconductors are made in part by condensing certain substances into solid forms.

The Holiday Snowflakes stamps will feature multi-branched stellar dendrites, with six symmetrical main branches and many randomly placed side branches and sectored plates. These represent but one of seven primary types of snowflake patterns.

As you'd expect, no two of the stamps are alike. But what about out in the field? Are they really all different?

"The answer is basically yes, because there is such an incredibly large number of possible ways to make a complex snowflake," Libbrecht said. "In many cases, there are very clear differences between snow crystals, but of course there are many similar crystals as well. In the lab we often produce very simple, hexagonal crystals, and these all  look very similar."