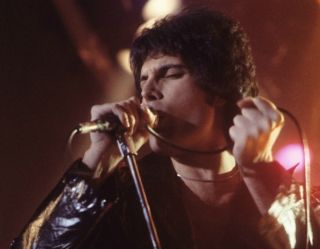 As the lead singer of the legendary rock band Queen, Freddie Mercury possessed a voice with the quicksilver qualities of his mercurial last name, soaring to seemingly impossible heights before descending to rumbling depths, and lending a signature drama to Queens' distinctive sound.

During the two decades that Mercury led the band, the extent of his impressive vocal abilities were the subject of much speculation, but they were never studied in depth. Now, researchers have conducted the first analysis of the singer's noteworthy technique.

Using acoustic data from sampled recordings and vocal re-enactments, they evaluated Mercury's speaking and singing voice. The conclusions of their analysis were collected in a study that the authors describe as "a work of fan-science." [5 Things a Person's Voice Can Tell You]

Lead author Christian Herbst told Live Science in an email that Queen had been one of his favorite bands since he was a teen. "That certainly was an incentive for conducting this study," he said.

Herbst, a vocal scientist with the Voice Research Lab at Palacký University, Olomouc, in the Czech Republic, explained that he was curious to get to the bottom of what enabled Mercury to sing with such skill, and what might explain the wide range of vocal expression that he brought to his recordings and to live performances.

"This research project was an attempt to gain some objective insights into his singing style, using rigorous scientific methods rather than subjective imagery," Herbst said.

To understand the extent of Mercury's capabilities, the researchers examined many aspects of his vocal performance, including his range, the frequency of his voice while speaking and singing, and his vibrato — a singing technique in which pitch varies slightly but very rapidly.

The trademark high notes that Mercury regularly hit are typically associated with singers identified as tenors. But when the researchers analyzed Mercury's speaking voice — sampling six interview recordings — they found that he spoke at a frequency of 117.3 hertz, which is considered normal for a baritone voice. This exceptional control over his voice may have allowed him to perform as a tenor, the scientists said in a statement.

They added that Mercury was known to have considered an opportunity to perform in an opera duet as a baritone, but he rejected the offer because he doubted that his fans would recognize his voice in the lower register.

The frequency range of his singing voice was also found to be well within the reasonable range for a baritone, the researchers said in the study.

But listening to Mercury's recorded vocals could only tell them so much. To really understand what might have been happening while he was singing — how the larynx moves and how the vocal folds vibrate — they would need a stand-in for the deceased singer.

Fortunately, one of the study co-authors, Daniel Zangger-Borch, also happened to be a rock singer and vocal coach.

Using an endoscopic high-speed camera, the scientists recorded Zangger-Borch singing Queen's songs at 4,132 frames per second, showing them what would likely have been happening in Mercury's larynx while he produced lower-pitched, rougher sounds.

Finally, they reviewed recordings of 240 sustained notes that Mercury sang without musical accompaniment. And they detected something unusual in Mercury's vibrato — it was noticeably different from that of other performers.

"In comparison with data from both classical and pop/rock singers, Freddie Mercury's vibrato was unusually fast, and the modulation was sometimes quite irregular," Herbst told Live Science. "That created a very special 'vocal fingerprint.'"

Appreciating Queen's music doesn't require a deep understanding of how its vocalist got the job done. But these insights into one of rock 'n' roll's most distinctive voices might make the listening experience just a little more interesting, the researchers suggested.

The findings were published online April 15 in the journal Logopedics Phoniatrics Vocology.