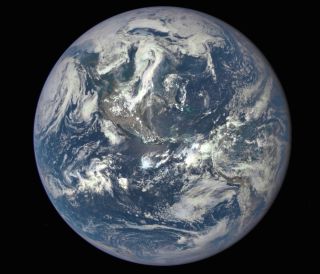 A NASA camera on the Deep Space Climate Observatory satellite returned this view of the sunlit side of Earth from 1 million miles away.
(Image: © NASA)

There may be fewer Americans truly celebrating Earth Day this year: A new Gallup Poll finds that the percentage of people in the U.S. who say they are "environmentalists" is down to 42 percent.

In 1991, one year after Earth Day had become an international celebration, the Gallup Poll found that 78 percent of Americans identified themselves as environmentalists. That was the highest percentage found to date since Gallup began asking this question in 1989.

One reason for the decline could be that caring about the environment has become politicized, according to a statement from Gallup. The poll found a gap of 29 percentage points between Republicans who said they think of themselves as environmentalists (27 percent) and Democrats who said the same (56 percent).

Although major events like the Paris Climate Talks — for which an agreement was signed this Earth Day — have brought nations of varying political beliefs together to protect the environment in recent years, political partisanship in the U.S. has made topics such as climate change more of a political debate than a public concern, Gallup said.

For example, in 1989-1990, more respondents said they were concerned about issues such as air and water pollution than this year. In addition, although concern about climate change has slightly increased, it still ranks below most other environmental problems asked about in the poll.

Although the poll does generally show decline in both environmental concern and identification as environmentalists, it does not necessarily reflect a substantial weakening of the environmental movement.

Last year, a study on the spectrum of attitudes toward the environment in the U.S. found the vast majority of Americans (65 percent) fell somewhere in the middle of the spectrum. For example, they might agree that it is the responsibility of humans to care for the planet, but not agree that it is important to decrease fossil fuel production.

The researchers who did that study said these Americans hold "complex and nuanced perspectives on the environment," Live Science reported.

Another factor that may have contributed to the decline in people who say they are environmentalists is that environmentally friendly actions have become routine. From recycling to conserving energy, it is now commonplace to be Earth-friendly. Perhaps Americans today feel they would have to do more than just these things to consider themselves environmentalists, Gallup suggested. [The Harshest Environments on Earth]

Gallup conducted its annual environmental poll this year from March 2 to March 6, via telephone interviews with a random sample of 1,019 adults in all 50 U.S. states and the District of Columbia.