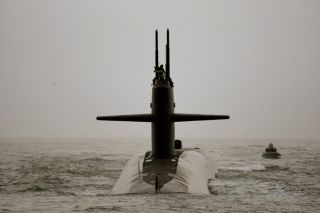 Flashy lasers should not make any sound in space, despite what "Star Trek" and "Star Wars" would have people believe. But lasers aimed underwater can and do create small supersonic explosions.

It's not just a light show. Naval researchers hope to use lasers for sonar detection, or even submarine-to-aircraft communication.

"The lasers we're using in experiments now are pretty compact," said Ted Jones, a physicist at the U.S. Naval Research Laboratory. "They're smaller than desk-sized and could fly on an aircraft."

Radios or other devices that rely on the electromagnetic spectrum don't work underwater, because water does not transmit such waves well. That means submarines cannot communicate from beneath the waves — they have to surface if they want to communicate with home base, planes or other naval ships.

Lasers could fill that communication gap, because water can act as a focusing lens if a laser has the right "frequency chirp." The chirp depends on the arrangement of different color wavelengths within a laser beam, because each color travels at a slightly different speed underwater.

The water's focusing effect squeezes the laser beam so that it gets narrower and narrower, and eventually creates a superheated explosion that can be heard.

"It's a very hot little bubble of steam that expands supersonically, makes a little shockwave, dissipates a bit and then turns into an ordinary acoustic pulse," Jones told LiveScience.

The naval researchers have used modest lasers to create pulses of 210 decibels, which far exceeds the sound of a jet engine or the loudest rock concert imaginable.

Playing with lasers underwater is nothing new for the U.S. Navy, but previous experiments used larger lasers and could only thermally heat the water without the pulse effect.

Much understanding of the acoustic pulse effect came from laser eye surgery, where scientists wanted to reduce the effect. Now Jones and his colleagues want to do the exact opposite and enhance the acoustic shock for a louder sound.

Jones envisions aircraft using lasers to transmit messages to submarines gliding beneath the waves. Or the lasers could allow aircraft to quickly search large areas of ocean with sonar systems, which listen for sound signatures reflected off of underwater objects.

"You put down an array of passive sonar buoys and go back over with same aircraft that dropped those," Jones explained. The aircraft could then use its laser to sweep a wide area and see what the sonar buoys detect.

But before any of that can happen, Jones and his fellow researchers are trying to improve the laser ranges underwater. Their current lasers can travel almost 66 feet (20 m) — not exactly Star Trek material, but still very sci-fi.