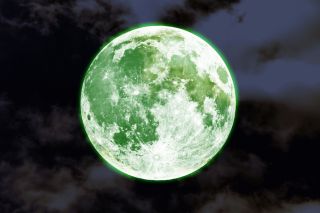 The moon will not turn green on April 20, 2016. A online rumor predicting a green full moon is nothing more than a lunar hoax.
(Image: © Space.com/Karl Tate)

Once again, a skywatching hoax has gone viral.

To go along with the infamous "Mars hoax," which claims that the Red Planet will appear as large as the full moon in the sky; the "Nibiru cataclysm," a supposed disastrous encounter between Earth and a large planetary object; and "Zero-Gravity Day," when people on Earth supposedly can experience weightlessness, we now have the "nights of the green moon."

This latest fallacy to sweep the blogosphere claims that on Wednesday (April 20), and again on May 29, the moon will appear to turn a shade of green. The full moon of April will occur on Friday, April 22. [The Moon: 10 Surprising Lunar Facts]

The explanation given for the verdant metamorphosis is that several planets are going to align (wrong!), causing the moon to glow with an eerie, greenish light for about 90 minutes. This spectacle is exceedingly rare (so we are told), and last took place way back in the year 1596.

As has been the case with the bogus Mars, Nibiru and zero-gravity hoaxes, the green-moon message implores you to "share this event!" And sadly, many people have apparently been snookered into doing just that.

Interestingly, the date given for the first "moon of a different color," April 20, is also "National Weed Day" — a day that celebrates the smoking of marijuana and cannabis culture in general. Pot enthusiasts refer to the day numerically ("four twenty"), and the stated interval between "green moons" is said to be 420 years.

These may not be coincidences. It could very well be that whoever came up with the "green moon" story chose the April 20 date and/or the 420-year period as a reference to National Weed Day, whose predominant color is also green.

The original green-moon deception indicated that Earth's nearest neighbor would change hue on May 29. The supposed explanation was that the moon would be just 4 degrees from the green-hued planet Uranus in the sky, and would somehow acquire a green sheen from the close interaction. This will not happen, of course.

Somehow, that initial story was amended, and April 20 came into the picture as well. In any case, the nights of the "green moon" are nothing more than an urban legend. And if you're a faithful reader of Space.com, you already knew that these stories are hoaxes, because you've consulted our list of the top skywatching events of 2016. The green moon is not mentioned.

For most of human history, the moon was largely a mystery. It spawned awe and fear and to this day is the source of myth and legend. But today we know a lot about our favorite natural satellite, and we think you should, too.

What I personally find most distressing about the "green moon" and other hoaxes are all of the emails I receive from seemingly knowledgeable and intelligent people. These missives all start out with some variant of the following:

"I know this probably isn't true, but can you verify this?"

As if there were some reasonable chance that, on a given night, Mars would appear as large as the moon in the sky, or that there would be a huge planetary object that would ultimately spell disaster for our planet, or that on a given day, you could become weightless.

Or that the moon will turn green.

Use your critical-thinking skills: If something sounds too weird, crazy or amazing to be true, it probably isn't true. So, if somebody sends you an email or a tweet, or you see a Facebook post announcing that the moon will turn green on April 20 or May 29, just ignore it. Please?

Joe Rao serves as an instructor and guest lecturer at New York's Hayden Planetarium. He writes about astronomy for Natural History magazine, the Farmer's Almanac and other publications, and he is also an on-camera meteorologist for News 12 Westchester, New York. Follow us @Spacedotcom, Facebook or Google+. Originally published on Space.com.