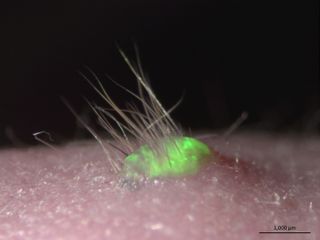 In a lab in Japan, researchers have grown complex skin tissue, complete with hair follicles and sweat glands, according to a new study.

The researchers implanted the tissue into living mice, and found that the tissue formed connections with the animals' nerves and muscle fibers. The findings may one day help researchers create better skin transplants for human patients with severe burns or skin diseases.

Prior to the new study, researchers had already developed a more basic type of skin substitute that had been used successfully in human patients, said Takashi Tsuji, a team leader at RIKEN Center for Developmental Biology in Japan. But that skin had only one or two layers of tissue, and lacked features such as hair follicles and the glands that secrete sweat and oil called sebum, he said.

In the new research, the scientists generated skin that had not only those features but also all three layers of tissue that normal skin has. [5 Ways Skin Can Signal Health Problems]

The work began with cells collected from mouse gums. The researchers used chemicals to transform these cells into cells that were similar to stem cells. Then, the researchers used these cells to generate three-layered, fully functioning skin tissue in lab dishes. Then, they transplanted this tissue, complete with hair follicles and glands that produce sebum, into mice.

The researchers found that the tissue made normal connections with surrounding nerves and muscle tissues in the mice, and those connections allowed the tissue to function normally. The mice's immune systems did not reject the transplanted tissues.

Moreover, 14 days after the tissue had been transplanted, the researchers noticed that hair had sprouted from the bioengineered hair follicles and started to grow. [Top 3 Techniques for Creating Organs in the Lab]

"Our present outcomes indicate a proof of concept of regenerative therapy of [a] fully functional and integrated skin organ system that will have a potential for the application of the future clinical treatment," Tsuji told Live Science.

However, the researchers noted that, to generate human tissue for use in people, they would have to start with human cells, and would still have to figure out how to grow skin tissue from those cells, the researchers said.

Besides its potential application in human patients, the newly developed skin tissue also could be used as an alternative to testing cosmetics on animals, the researchers said.

The researchers are currently trying to generate other organs that are associated with skin tissue, such as teeth and salivary glands, Tsuji said.

The new study was published today (April 1) in the journal Science Advances.