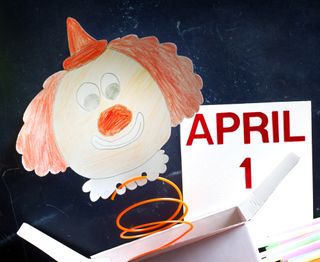 Do you love pulling pranks on your friends or are you the one who's likely to get duped?
(Image: © udra11 / Shutterstock.com)

Do you spend April 1 in a state of skeptical wariness? Do you scrutinize all news headlines and personal interactions for signs of someone wanting to pull one over on you?

If so, you may have a case of (perfectly justified) sugrophobia, or fear of being duped. The question is, why do we have an entire holiday devoted to duping others? What's so funny, after all, about convincing radio listeners that gravity's effect will be lessened at a certain time, or running a fake news story about spaghetti trees, to name two famous April Fools' hoaxes?

Pranks have not been thoroughly studied, though researchers have found that people find being tricked a very aversive experience. Prank-based humor can be cruel or kind, loved or hated, but it's anything but simple. [6 of the Best Science-Themed April Fools' Jokes]

Pranks "combine a whole bunch of theories, potentially, of laughter," said Cynthia Gendrich, a professor of acting and directing at Wake Forest University who teaches a seminar on why people laugh. Superiority, surprise and the humorous relief of tension probably all play roles, she said.

Part of the gang

The precursors to April Fools' Day may date back to the silly spring festivals of the ancient Romans or to practical jokers of the Middle Ages. Whatever the origins, pranks can have their perks. Gentle teasing and pranking can serve as a kind of social glue, sociologists and psychologists say.

The late sociologist Harold Garfinkel, of UCLA, wrote about "degradation ceremonies," forms of hazing designed to put a person in his or her place, but also tie a group together. For example, imagine the camaraderie of a group of soldiers going through boot camp together. In typical hazing ceremonies, the pranks flow from the top: Older fraternity brothers use permanent ink to doodle on passed-out pledges. Established employees tape the new guy's stapler to his desk. As long as these jokes aren't overtly harmful, they generally serve to mark a person as part of the group.

April Fools' Day upends these hierarchies and gives everyone the chance to play jester, sociologist Jonathan Wynn wrote in 2013 on the Everyday Sociology blog.

"April Fools' Day is like a pressure valve, a release, that then recalibrates things back into place," he wrote.

Release may be part of the humor inherent in pranks, Gendrich told Live Science. Many pranks involve a fair amount of planning and suspense, as the prankster anticipates the reaction of his or her mark.

"There's a whole theory that says that most of our social laughter has to do with expelling extra energy," Gendrich said. Setting up a prank builds tension, and the payoff is a release of that tension. Sometimes, just dreaming up a joke and imagining the reaction can be enough for a laugh, Gendrich said.

Gendrich described an easily startled college friend who would scream and jump if surprised. The humor in scaring her was how automatic — and out of proportion — the reaction would be, Gendrich said.

Most people stop laughing when pranks turn harmful, Gendrich said, but pranking does have a dark side. Part of the humor in pranking may come from a sense of superiority the prankster feels after making someone else look foolish, she said. And pranks can certainly go too far, as examples of fraternity hazing turned deadly demonstrate.

A 2007 study in the journal the Review of General Psychology found that people do not like being duped — though that research focused on the experience of being betrayed in an economic game, not on practical jokes. Interestingly, people who were duped showed signs of self-blame, wishing they'd played the game differently. The findings suggest that sugrophobia, or the fear of being duped, motivates people's behavior, the researchers wrote. ("Sugro" is Latin for "to suck," so sugrophobia is literally the "fear of being suckered.") The self-recrimination that comes with being duped may act as a warning not to trust so easily again. In that sense, April Fools' Day might be a nice annual reminder to keep one's guard up all year round.