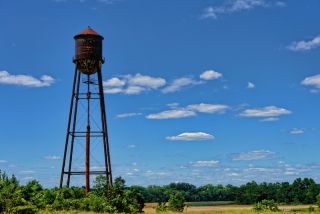 It's no surprise that water towers store water, but it's less well known that they also store energy.

The whole process starts at the water treatment plant. After the water is treated, electronically powered mechanical pumps send it through pipes, either to serve an immediate need (think showers, dishwashers and water sprinklers) or to a water tower for storage.

"On a normal day, people are turning on their faucets and flushing their toilets," said Enos Inniss, an assistant teaching professor of civil engineering at the University of Missouri. "The water that people are not using — it has to go somewhere," and that somewhere is the water tower. [The Surprisingly Strange Physics of Water]

Moreover, the taller the water tower, the more potential energy the water has, he said. If a water tower is holding water for a small area that's nearby — a cemetery graveyard, for instance — it might sit on the ground, like one that Inniss said he saw recently on a road trip.

But if a water tower is designated to hold water for a large metropolitan area that's far away, it will likely be tall and have an enormous tank. A standard water tower can hold 50 times the volume of a regular backyard swimming pool, which holds about 20,000 to 30,000 gallons (about 76,000 to 114,000 liters) of water, according to HowStuffWorks.

For instance, "The Giant Peach" water tower in Gaffney, South Carolina, which also serves as a tourist attraction, is 150 feet (46 meters) tall and holds 1 million gallons (3.8 million liters) of water, according to the U.S. Geological Survey.

"The taller you go, the more pressure you can create inside of the system because it has farther to fall," Inniss told Live Science.

Water towers typically fill up when demand for water is low. This usually happens at night after most people go to bed. The pumps at the water treatment plant continue to send out water, but instead of going to people's sinks, the water goes into water towers for storage.

Then, during the morning rush — when people are running water to brush their teeth, take showers and brew coffee — that stored water, in addition to the water coming from the treatment plant, is available to through pipes to  homes, Inniss said.

Water towers also ensure that there's a supply of water during power outages, at least until the water runs out. During an electricity outage, the pumps at the water treatment plant would likely stop working (unless there's a generator), Inniss said. But because the water in the tower already has potential energy, it doesn't need more electricity to flow out of the tank. [5 Ways Humans Waste Water]

"Once the tower is empty, then I now need a pump to move the water through the pipe again [from the water treatment center]," Inniss said.

In big cities such as New York, many apartment and office buildings have water towers on top of their roofs. These water towers not only serve an immediate need, but also give some cities an iconic look, Inniss said.

Other water towers also serve as art, including the Brooks Catsup Bottle Water Tower in Collinsville, Illinois, and a corn-shaped water tower in Rochester, Minnesota.