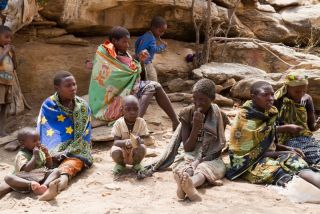 The people of the Hadza society considered the act of poisoning the water supply equally bad regardless of intent, new research finds. Here, a Hadza family in Mangola, Tanzania.
(Image: © LUCARELLI TEMISTOCLE / Shutterstock.com)

If someone were to walk off with your shopping bag in a crowded marketplace, would you judge the petty thief less harshly if he or she grabbed your bag by mistake?

The answer to that question may depend on your culture, finds a study led by University of California, Los Angeles, anthropologist Clark Barrett.

The researchers tested the degree to which intentions influence the way people judge the actions of others in societies across the globe. The result? The extent that intentions affect people's moral judgments varied across cultures. [Understanding the 10 Most Destructive Human Behaviors]

According to most philosophical and anthropological research, and according to the law in many societies, intentions affect moral judgments, Barrett told Live Science. Take, for example, the distinction between first- and second-degree murder. The difference has to do not with the actual act itself, but rather with the state of mind of the perpetrator when committing the act, Barrett said. (A first-degree murder is premeditated; a second-degree murder is not.)

More generally, "there are many cases where how harshly you might blame someone for doing something or failing to do something might depend on your judgments about whether they did it on purpose or not," he added.

In fact, the scientific literature suggested that weighing intentions when making moral judgments was a universal human trait, an idea Barrett and colleagues termed "the moral-intent hypothesis." Most of the studies supporting this conjecture, however, took place in Western, industrialized countries. Barrett said he and his colleagues wondered if the hypothesis held true in small-scale societies in other parts of the world.

The study involved 322 participants in 10 populations on six continents. These populations included two Western societies, one urban (Los Angeles) and one rural (the Ukrainian village of Storozhnitsa), as well as eight smaller-scale communities from other parts of the world.

To determine how study participants made moral judgments, researchers presented individuals with several stories in which a person, the actor, committed a harmful act of some kind; participants were then asked to rate the "badness" of the action, on a 5-point scale ranging from "very bad" to "very good." The scenarios included theft (of a shopping bag in a marketplace), physical harm (hitting someone), poisoning (a community water supply) and committing a food taboo (eating a culturally frowned-upon food).

Importantly, the scenarios also varied by whether the wrongdoings were accidental or intentional.

Pooling data from all of the societies studied, the hypothesis held up: Overall, people regarded intentional actions about five times as severely as accidental ones.

However, among the 10 societies, the extent to which intent affected moral judgments varied. In the Western societies, Los Angeles and Storozhnitsa, intent seemed to influence people's moral judgments the most. Whether an act was purposeful or inadvertent mattered much less to participants on the Fijian island of Yasawa, and to the Hadza and the Himba, two populations in Africa, than it did in other populations, Barrett said. [Op-Ed: The Evolution of Moral Outrage]

For example, poisoning a water supply "was judged, essentially, maximally bad by the Hadza and the Himba regardless of whether you did it on purpose or by accident," Barrett said.

"People said things like, 'Well, even if you do it by accident, you should not be so careless,'" Barrett added.

In other societies, in contrast, while people still judged the accidental poisoning as bad, they viewed it less harshly than they did the malicious one.

The researchers also examined the way other "mitigating" factors — such as whether the agent acted in self-defense, acted based on misinformation or was insane — might soften participants' moral judgments. Across the board, people viewed acting out of necessity — the example of necessity given was knocking another person down to reach a water bucket to put out a fire — and acting in self-defense as factors that would mitigate a moral judgment. There were also some cross-cultural variations in the factors that people regarded as mitigating: the factors of insanity or acting on mistaken information were seen as mitigating in L.A. and Sorozhnitsa, but not on Yasawa.

"We in the West and people who have been educated in a Western scholarly tradition … think that intentions are quite relevant to moral judgments, so one of the surprises of the paper was that there were more contexts and places than we might have expected when they [the intentions] were less relevant than we thought," Barrett concluded. "That might mean that there are many other examples of moral variation that we have yet to discover."

The research was published online March 28 in the journal Proceedings of the National Academy of Sciences.