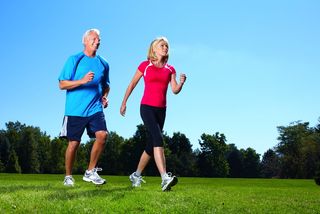 Older people who exercise may experience a slower rate of cognitive decline than those who don't exercise, according to a new study.

The people in the study who did not exercise at all or who exercised very little experienced a decline in their memory and thinking skills equal to 10 extra years of cognitive aging compared with the people who were more physically active. The people were 71 years old, on average, at the start of the study.

"More and more evidence is suggesting that exercise is good for the brain, and in this observational study, we found that people who were more active declined less on certain tests than people who were less active," said study co-author Dr. Clinton B. Wright, an associate professor of neurology at the University of Miami in Florida.

In the study, the researchers looked at 876 people. They asked the participants how long and how often they had exercised, and what type of exercise they had done, during the past two weeks.

The difference in cognitive decline between the groups was equal to 10 years of aging, the researchers said. The effect held when the researchers accounted for other factors known to affect brain health, such as smoking, alcohol use, high blood pressure and body mass index.

The study showed there was an association between exercise and the people's cognitive function, but it did not prove there was a cause-and-effect relationship between the two.

It is not clear why, exactly, exercise may benefit cognition, but several potential mechanisms may be involved, Wright said. For example, exercise helps to increase the amount of blood flow to the brain, which is generally beneficial to brain function. Moreover, exercise may lower the risk of other health factors that are linked to a higher risk of brain damage, such as diabetes and high blood pressure, Wright said. It may also lower levels of inflammation, which also has been linked to poorer brain health. [6 Foods That Are Good For Your Brain]

More research is needed to examine whether certain exercise programs are particularly effective in protecting against cognitive losses, and to see exactly how much exercise is necessary to gain these cognitive health benefits, Wright said.

The new study was published today (March 23) in the journal Neurology.