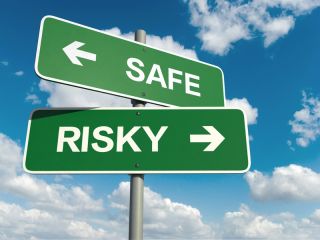 People are more prone to take risks that align with the level of risk-taking that they observe in others, a new study finds.
(Image: © Jane0606)

Countless parents have asked, "If your friends jumped off a bridge, would you do it, too?"

And although it's unclear exactly when in human history the first child might have rolled her eyes in response to this query, it does turn out that moms and dads are right to worry: The influence of those around us can affect decisions we make about risk-taking, according to a new study.

In the study, researchers analyzed the behavior of people who risked money (not personal safety) and found that after observing risky behavior in others, people were more likely to take risks themselves.

Social scientists use the term "behavioral contagion" to explain the phenomenon of people shifting their beliefs, opinions or emotional states to conform with those expressed by others around them, said Shinsuke Suzuki, a co-author of the study and a postdoctoral scholar in neuroscience at the California Institute of Technology.

The new study shows that people can "catch" a tendency toward risky behavior based on proximity to people who are risk-seeking, Suzuki told Live Science in an email.

But the study also found that people shy away from taking a risk if they observe others doing the same, he added.

"Primarily, our findings advance our understanding in how our own risk-taking behavior can be influenced through passively observing other agents," Suzuki said.

In the study, 24 people faced a gambling scenario. They were given 4 seconds to decide whether they wanted to say "yes" to a sure thing — a guaranteed win of $10 — or take a chance at getting a higher amount.

Sometimes they were also asked to observe others making the same choice, or even to predict someone else's response (whether they were likely to take a risk or not), without being able to see the outcomes of their choices.

The scientists found that when participants didn't observe others' choices, the majority behaved cautiously, and were more likely to choose the safer bet — the guaranteed $10.

But when participants observed others who were engaged in risk-taking behavior, they were likely to also adopt the riskier bet, even though they had no way of knowing if the risks actually paid off for the people they were observing.

"Our present findings indicate that when an individual has the opportunity to consistently observe the risky behavior of another agent, one’s own risk-preference can be directly influenced," the scientists concluded.

The scientists also tracked the participants' brain activity, to determine what was happening on the neural level as they observed varying levels of risk-taking in others, as well as when they made their own choices. [10 Easy Paths to Self Destruction]

The scans revealed there was neural activity in the region of the brain associated with observation and learning when they observed others. But the scans also showed that activity in another brain region — the caudate nucleus, which is linked to risk assessment — changed after the participants watched others seek out risks.

Together, the findings provided a neural map of how observing risk-seekers can lead to "contagion" in the observer and prompted them to behave in the same risk-seeking manner, the study authors said.

Other research has also suggested that people really do "catch" certain behaviors from others.

Laughter is often described as contagious, and a 2006 study from researchers in England found that it really is, with the brain signaling facial muscles to smile in response to hearing others laughing. Other studies have suggested that yawning is contagious — especially among friends — and this is true among chimpanzees and even among wolves, as well.

A 2013 study in the Journal of the Royal Society Interface showed that clapping is an example of a "contagious behavior," with one of the researchers describing behaviors like applause after a performance as something that hops from person to person "until most of the room is infected."

This could provide clues for understanding risk-taking patterns in financial markets, Suzuki suggested, by showing that perception of risk can be changed by mere exposure to the risk preferences of others.

The findings were published online today (March 21) in the journal Proceedings of the National Academy of Sciences.