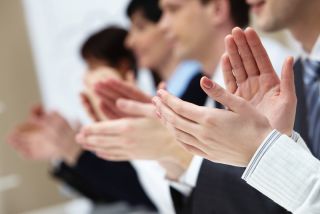 Applause spreads like a disease, according to research published June 18, 2013 in the Journal of the Royal Society Interface.
(Image: © Pressmaster, Shutterstock)

How do you decide when to start clapping after a virtuoso performance? And when do you stop?

New research finds the answer lies in what other people around you are doing. The louder the applause — indicating that more people are clapping — the more likely you are to join in, according to the study published today (June 18) in the Journal of the Royal Society Interface.

The findings aren't just about clapping: Researchers are trying to understand how social behaviors, including everything from fashion trends to political protests to suicide, spread among humans. [15 Weird Things Humans Do Every Day]

"Behaviors can spread through a group a bit like a disease," said Richard Mann, a mathematics researcher at Uppsala University in Sweden. "They hop from person to person until most of the room is infected."

Mann and his colleagues had previously researched how birds move in flocks and fish swim in schools. The applause study was a way to examine a similarly simple group behavior in humans.

To get people clapping, the scientists assembled groups of 13 to 20 students into audiences and had them watch a brief presentation by another student. The audience was told the presenter was a volunteer, so they should give that person a hand after the talk. Unbeknownst to the participants, however, the researchers were filming them, recording exactly when they started and stopped clapping.

The experiment was repeated six times, with the same presentation but different audiences.

The main discovery, Mann told LiveScience, is that neither your immediate neighbors' behavior nor the quality of the presentation determines the spread of clapping. Instead, clapping built upon itself.

"People started to pick up the rate at which they clapped when they heard more and more people in the room clapping," Mann said.

On average, the first person started clapping 2.1 seconds after the presentation ended, with the whole room joining in by 2.9 seconds. The applause (from start to finish) lasted an average of 6.1 seconds.

"There wasn't a tipping point," at which a crucial number of people started clapping so everyone joined in, Mann said. "The social pressure to clap just increased in proportion to the number of people who had already done so."

Clapping stopped in a similar way, with people following the crowd to cease their applause, Mann said. But the length of clapping varied widely, because someone in the group had to be the first to decide to stop. This leader's cessation of clapping triggered a cascade of more and more people stopping, too.

The clapping pattern roughly fits a disease model, in which the greater the number of people who have a cold, the more likely you are to get it, Mann said. The study confirms the disease-like spread of behaviors, he said, which scientists have long speculated over but haven't been able to test experimentally before.

Ultimately, Mann said, the goal is to expand the research to more complex behaviors. Scientists could track social media chatter, for example, to determine which cues trigger people to join a social protest movement. Close friends might have a big influence, Mann said, or perhaps the general amount of chatter in a wider social network is the determining factor.

"With clapping, there is very little consequence when you get it wrong, whereas joining a protest movement, especially in a repressive country, you need to be sure you're doing the right thing," Mann said.