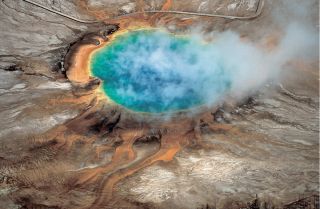 When a supervolcano like Yellowstone erupts, residents may have a few hours to escape once the disaster has started, a new study suggests.
(Image: © "Windows into the Earth," Robert B. Smith and Lee J. Siegel)

Can you outrun a supervolcano? New evidence from an ancient eruption suggests the answer is a surprising yes.

"I wouldn't recommend anyone try to outrun a volcano, but there's a few of us that could," said Greg Valentine, a volcanologist at the University at Buffalo in New York.

By analyzing rocks trapped in volcanic ash, Valentine and his colleagues discovered the lethal ash flow spread at street speeds — about 10 to 45 mph (16 to 72 km/h). It might be hard to sustain this pace on foot, but it's certainly possible by car. [Big Blasts: History's 10 Most Destructive Volcanoes]

The findings were published today (March 7) in the journal Nature Communications.

"It's really interesting how you can have such a violent eruption producing such slow-moving flows," said Valentine, co-author of the new study. "They still devastate a huge area, but they're slow and concentrated and dense," he told Live Science. His collaborators include Olivier Roche, of Blaise Pascal University in France and David Buesch, of the U.S. Geological Survey.

Of course, the safest way to deal with any rumbling volcano is to get as far away as possible. Lots of distance can prevent the most common cause of death associated with volcanoes: being trapped and suffocated by a torrent of ash, rocks and superhot gas that explode out at speeds of up to 300 mph (about 480 km/h). These "pyroclastic flows" are the real volcanic killer, not lava. A pyroclastic flow wiped out the Roman town of Pompeii, and in 1902, Mount Pelée on Martinique unleashed a pyroclastic flow that killed some 29,000 people. [Preserved Pompeii: Photos Reveal City of Ash]

You should still evacuate

Volcanologists try to account for such hazards when planning for future disasters. But it's hard to know what will happen when a supervolcano the size of Yellowstone blows its top. The last supereruption on Earth was 74,000 years ago, in Toba, Indonesia. Looking at the rocky remains of past supereruptions can reveal how and why supervolcanoes erupt.

The researchers measured rocks at the bottom of the tuff in Arizona that were carried in the flow. They matched unique rock types back to their source, and found that many of the rocks, whether fist-size or boulders, were carried no farther than a football field.

Accounting for the size and position of these rocks helped the researchers build a model of how fast and thick the ash flow was as it traveled. It turns out that only a dense, slow-moving pyroclastic flow could suck up the rocks from the surface and trundle them along. A fast, relatively thin flow would have to reach impossible speeds — up to 1,454 mph (2,340 km/h) — to carry the rocks, the researchers found.

"I think it's plausible but speculative," said Calvin Miller, a volcanologist at Vanderbilt University in Tennessee, who was not involved in the study. "It will be interesting to see how the [scientific] community responds to it. Even if they're right for the Peach Springs Tuff, this is just part of a continuum of eruption styles," Miller told Live Science.

The origins of the Peach Springs Tuff can be spotted in southwestern Arizona's Black Mountains, near the town of Oatman. The eruption left behind a very large crater called a caldera, though it has been mostly obliterated by erosion and faulting.

The caldera, called Silver Creek, spewed magma for several days, releasing a volume of about 1,000 times the Mississippi River's daily flow at New Orleans, Valentine said. "If you think about 1,000 Mississippi Rivers coming out of the ground, you can see how [the ash] would have spread out across a huge area," he said.

However, one expert on the Peach Springs Tuff doesn't buy the scenario. Charles Ferguson, a research geologist with the Arizona Geological Survey, said there are outcrops that suggest the ash moved quickly and energetically, like a typical pyroclastic flow.

"I think their hypothesis is more problematic than explanatory," Ferguson told Live Science.

The Peach Springs Tuff covers parts of Arizona, Nevada and California, from Barstow, California, to Peach Springs, Arizona. Geologists use the creamy white and pink rock as a unique marker in the region.

The western United States suffered at least 100 of these huge eruptions starting about 40 million years ago (a consequence of shifting tectonic plates). It's not clear whether every one of these supervolcanic blasts sent out slowly moving ash flows, but Valentine said he sees similar evidence in other areas.

Any supereruption will likely come with a fair amount of warning, similar to the bulge that foreshadowed the Mount St. Helens eruption. The new findings suggest that people living near a supervolcano might have a few hours to evacuate once the disaster starts, the researchers said.