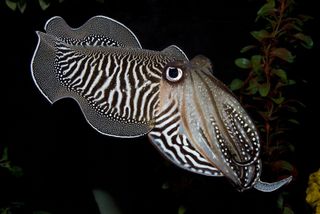 A colorful cuttlefish wows visitors at the Smithsonian's National Zoo in Washington, D.C. These remarkable squidlike creatures are known as "sea chameleons" because of their ability to rapidly change colors and blend in with their surroundings. Cuttlefish use this natural camouflage to protect themselves from predators. [Related Gallery: Photos of Color-Changing Cephalopods]
(Image: © Mehgan Murphy/Smithsonian's National Zoo)

Vast communities of migrating deep-sea marine life are the culprits behind a mysterious, low-frequency humming sound in the ocean, made as the creatures swim to and from the surface at feeding time.

The discovery, made by University of California, San Diego assistant research biologist Simone Baumann-Pickering, answers a long-standing question. The source of the hum has for years vexed marine biologists, as NPR reports. They knew the sound wasn't consistent with whale calls or other marine mammals, such as dolphins, communicating.

Now, thanks to high-sensitivity undersea audio recordings, Baumann-Pickering says it's animals such as fish, jellies, shrimp, and squid living in what's known as the ocean's mesopelagic zone — a range 200 to 1000 meters (660 to 3300 feet) below the surface — that are behind the sound.

Creatures in the mesopelagic neighborhood live deep down, in a dark world where the sun barely shines and there's not exactly a bounty of food. So each night, with the safety of darkness, they venture up to the surface where food is more plentiful.

And when they head up top (or back down) the hum — about 3 to 6 decibels louder than ocean background noise — kicks in.

"It's not that loud," Baumann-Pickering said in a statement. "It sounds like a buzzing or humming, and that goes on for an hour to two hours, depending on the day." (Check out a sound clip of the humming here.)

The purpose behind the sound is still an open question. Baumann-Pickering said it could be a signal to the entire group to head up to the surface or back down.

While it's neat to think that such communication could be happening among the animals, there could also be a less high-minded reason for the hum. It turns out the creatures might just be passing gas, as their swim bladders regulate their buoyancy.

"It's known that some fish are considered to be farting," Baumann-Pickering told NPR, "that they emit gas as they change depths in the water column."

If the denizens of the mesopelagic are engaging in communication of some kind, then learning more about the messages being conveyed and which specific animals are doing the conveying would help scientists come to a better understanding of the ecosystem they inhabit, according to Baumann-Pickering.

It could also tell researchers more about the predators that feed on the mesopelagic animals — if the hunters are listening in, then the hum may tip them off that food is nearby.

Baumann-Pickering presented her findings at the Ocean Sciences Meeting being held in New Orleans.