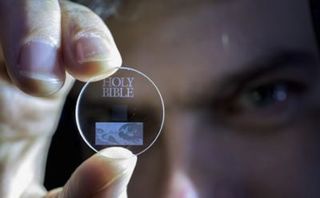 Copies of the Magna Carta, the Universal Declaration of Human Rights and the King James Bible have now been digitally stored on a piece of glass known as a "Superman memory crystal" that has the capacity to save huge amounts of information for up to 13.8 billion years, researchers say.

Using a method of laser etching, researchers at the University of Southampton, in the United Kingdom, archived these documents, along with Isaac Newton's scientific treatise "Opticks," on coin-size pieces of glass. These tiny discs can survive for billions of years at temperatures of 374 degrees Fahrenheit (190 degrees Celsius). And at room temperature, they can last virtually forever, the researchers said.

"It is thrilling to think that we have created the technology to preserve documents and information and store it in space for future generations," Peter Kazansky, a professor at the university's Optoelectronics Research Centre, said in a statement. "This technology can secure the last evidence of our civilization; all we've learnt will not be forgotten." [Science Fact or Fiction? The Plausibility of 10 Sci-Fi Concepts]

Kazansky and his colleagues first reported their "5D data storage" in 2013 at the Conference on Lasers and Electro-Optics in San Jose, California. The researchers use fematosecond lasers, which are lasers that produce very short pulses, to inscribe information in nanostructured dots that are 5 micrometers apart. These nano-size etchings polarize light that travels through the glass. A combination of a polarizing lens and an optical microscope is all that is needed to "decode" the message, the researchers said.

The 5D moniker refers to the 3D positioning of the nanostructures as well as their size and orientation.

Southampton researchers gave the copy of the Universal Declaration of Human Rights as a gift to the United Nations Educational Scientific and Cultural Organization (UNESCO) in early February, part of the closing ceremony of that organization's Year of Light initiative. The scientists call the glass the "Superman memory crystal," a nod to memory crystals in the "Superman" films and comics. According to the university, the researchers are now seeking industry partners to further develop the technology.