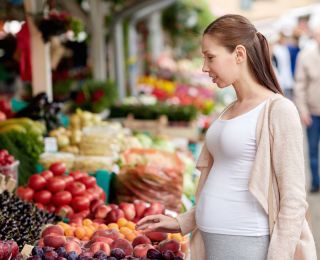 Gaining weight during pregnancy is both natural and essential. But limiting the weight gained during pregnancy to a healthy amount is a whole other story, and the old adage "eating for two" certainly doesn't help.

Women may think that "being pregnant gives them the license to eat anything," said Katherine Tallmadge, a registered dietitian and an op-ed contributor to Live Science. But gaining too much weight during pregnancy can have long-term health consequences for moms, she said.

That's because it can be really, really hard to lose that extra fat after delivering, she said.

Indeed, studies show that the amount of weight a woman gains during pregnancy plays a major role in how much she'll lose after giving birth. [The Best Ways to Lose Weight After Pregnancy]

So, with that in mind, here's how to gain weight during pregnancy in a healthy way.

To gain at the rate of 1 lb. (0.45 kilograms) a week — which is the recommendation for most women in their second and third trimesters — it takes only 300 extra calories a day, on average, Tallmadge told Live Science.

A woman could get those extra calories, for example, by drinking two glasses of milk (around 100 calories each) and eating one extra serving of a whole grain (around 100 calories), Tallmadge said. Adding a serving of yogurt or fatty fish is also a great idea, she said. (Women who are overweight or obese before pregnancy are recommended to gain less than 1 lb. weekly, so they need even fewer extra calories.)

In any case, the approach should be all about eating nutritious food, Tallmadge said, noting that these guidelines aren't much different from other health guidelines, with the exception that pregnant women need slightly more calcium, iron and folic acid than other adults do. (These can come from a prenatal multivitamin, she added.)

Dr. Jacinda Nicklas, an assistant professor of internal medicine at the University of Colorado School of Medicine, also said that women should increase their calories with healthy fats, such as avocados or nuts, not junk food.

Of course, weight-gain requirements change as pregnancy progresses, with the recommended number of calories increasing with each trimester.

Although it's relatively common for women to gain too much weight in the first trimester, for some, it may actually be difficult to get enough calories later in pregnancy.

During the third trimester, the developing fetus gains a lot of fat, and it's important for a pregnant woman to consume enough calories for the fetus to do so, said Kathleen Rasmussen, a professor of maternal and child nutrition at Cornell University.

But because of the growing size of the baby, and increasingly limited space in a woman's midsection, it can be difficult for women to eat large meals later in their pregnancy, Rasmussen told Live Science.

As such, Rasmussen recommends that, unless a woman is eating very-high-calorie foods, she should eat several small meals a day.