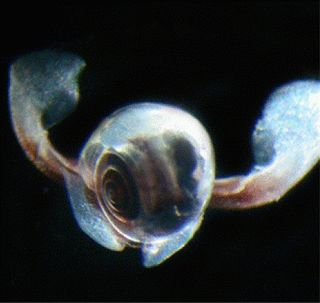 Some ocean-dwelling creatures ended up with common names that seem to belong to another animal entirely: A sea cow has neither horns nor an udder. A sea lion lacks a tawny mane. And jellyfish aren't true fish at all.

But the sea butterfly, a tiny marine snail, has more in common with flying insects than you might expect, according to a new study.

Also known as Limacina helicina, the sea butterfly navigates cold ocean waters in the northern Atlantic and Pacific. Its shell measures about 1 to 4 millimeters (0.04 to 0.16 inches) in diameter, and it swims using a pair of winglike appendages. It can retract these into its shell when threatened.

Many types of zooplankton, tiny ocean animals, have structures like the sea butterfly's, which they use as paddles to propel themselves through the water. But when researchers conducted the first-ever analysis of how the sea butterfly's appendages move, the scientists found that the creature swam in a completely unexpected way. It used movements entirely unlike the paddling of other zooplankton. [Video: Watch the Sea Snail Fly Like a Butterfly through Water]

"The more we looked into it, the more we found that the sea butterfly is an honorary insect," said study co-author David Murphy, from the Georgia Institute of Technology.

"We looked at the wing kinematics — how it moves its wings in a figure-eight pattern —and it's very similar to how a fruit fly beats its wings," Murphy told Live Science in an email.

To capture these hard-to-see movements, Murphy explained, the scientists used four high-speed cameras that recorded the snails as they swam in an aquarium, within a zone lit up by infrared lasers. But the researchers also wanted to track the movement of the water as the sea butterflies displaced it. To do that, the scientists seeded the water with tiny, light-reflecting particles.

"The four cameras let us determine the 3D position of each of the thousands of these particles," Murphy said, "and from their movement, we can measure the 3D flow around the animal."

The researchers found that the sea butterfly was using a flying trick common to many small insects: a technique called "clap and fling," in which the animal claps its wings behind it and then flings them apart, Murphy explained. This creates a miniature vortex of airflow — or water flow, in the sea butterfly's case — at each wing tip, providing extra lift.

"Sea butterflies are extremely fragile. They're sort of gelatinous like jellyfish, except for the hard shell," Murphy said. This presented challenges for shipping the creatures successfully from the West Coast, and for keeping them in good condition. But luck was with the researchers, and their wee swimmers not only arrived safely, but were also extremely cooperative, he said.

"It's really hard to get the animals to swim right in front of the camera, but these behaved beautifully and gave us perfect data," Murphy said.

The findings were published online today (Feb. 17) in the Journal of Experimental Biology.