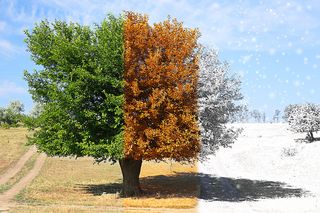 The way your brain works may vary from season to season, a new study suggests.

Researchers found that when people in the study did certain cognitive tasks, the ways that the brain utilizes its resources to complete those tasks changed with the seasons.

Although people's actual performance on the cognitive tasks did not change with the seasons, "the brain activity for the ongoing process varie[d]," said study author Gilles Vandewalle, of the University of Liege in Belgium.

In the study, the researchers looked at the cognitive brain function of 28 people in Belgium during each season of the year. Each time, the people spent 4.5 days deep in a lab, without access to the external world or seasonal cues such as daylight. The researchers scanned the participants' brains while they performed tasks testing their ability to sustain attention and to store, update and compare information in their memories.

The researchers found that the people's performance on these tasks did not change, regardless of the time of the year. However, results did show that the neural "cost" of performing these cognitive tasks — the amount of brain activity involved — changed with the time of the year. [10 Things You Didn't Know About the Brain]

For example, the levels of brain activity related to sustaining attention peaked in June, near the summer solstice, and were lowest in December, around the winter solstice.

In contrast, the levels of brain activity related to working memory peaked in the autumn, and were lower around the spring equinox.

Previous research has shown that changes in seasons are linked to changes in other processes related to people's daily functioning. For example, people tend to consume more calories in winter than in summer, the researchers said. And a study published in 2015 in the journal Nature Communications found that the activity of human genes changeswith the seasons, along with people's immunity.

Moreover, research has shown a link between seasons and mood, with some people experiencing symptoms of seasonal affective disorder (SAD) in fall and winter months, the researchers said.

These variations may in turn contribute to the seasonal changes in brain activity that the researchers observed in the new study, the investigators said.

The new study was published today (Feb. 8) in the journal Proceedings of the National Academy of Sciences.