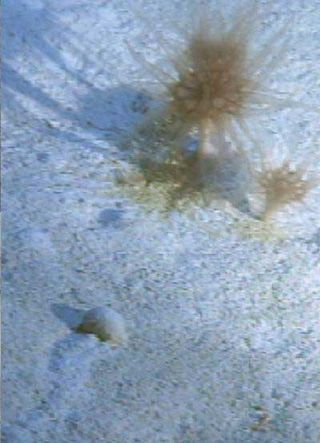 On a submersible dive off the Bahamas, Mikhail V. Matz of the University of Texas at Austin and several colleagues were seeking big-eyed, glowing animals adapted to darkness.

Yet as they cruised above the seafloor, the team was distracted by hundreds of bizarre, sediment-coated balls the size of grapes. Each sat at the end of a sinuous track in the seafloor ooze. Indeed, the balls appeared to have made the tracks; some even seemed to have rolled upslope.

The team collected specimens and identified the creatures as giant protozoans, Gromia sphaerica, each one a single large cell with an organic shell, or "test." When cleaned of sediment, the test feels like grape skin, but squishier, Matz says.

Surprisingly, the tracks on the Bahamian seafloor resemble grooves found in sedimentary rocks formed as long as 1.8 billion years ago. The ancient grooves, bisected by a low ridge, had constituted the only evidence that multicellular, bilaterally symmetrical animals, such as worms, might have evolved so early in Earth's history.

Matz's discovery [of modern tracks apparently left by G. sphaerica] suggests that protozoans could have made those fossil traces rather than more advanced animals, which probably appeared much later. The next earliest evidence of multicellularity and bilateralism in animals occurs in fossils 580 million and 542 million years old, respectively.

G. sphaerica are rhizopods, an ancient protozoan group. Matz is planning further studies of the species, about which little is known.

The findings were detailed in the journal Current Biology in November.