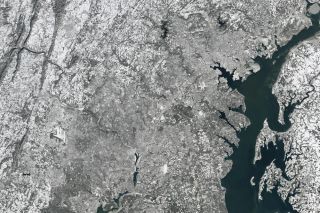 A satellite image of the aftermath of winter storm Jonas, acquired by the Landsat 8 satellite on Jan. 24, 2016.
(Image: © NASA Earth Observatory)

A massive winter storm that slammed the U.S. East Coast last weekend dumped so much white stuff on the ground that the extensive snow cover was clearly visible from space.

The winter storm, dubbed Jonas, dropped snow from Tennessee north to Massachusetts on Jan. 23, leaving millions of Americans shoveling driveways and sidewalks, and digging their cars out. The snowy weekend also made for some fun snowy romps for certain zoo animals.

The next day, Jan. 24, the Operational Land Imager on the Landsat 8 satellitecaptured this natural-color image of Virginia, Maryland and Washington, D.C. [Winter Storm Photos: Watch Jonas Wallop the Eastern US]

It was a record-breaking storm for many places: Airports near Baltimore recorded about 29 inches (74 centimeters) of snow; approximately 28 inches (71 cm) of snow fell in Newark, New Jersey, and Philadelphia recorded 22 inches (55 cm) of snow, according to the Weather Channel. The highest snow total, 42 inches (107 cm), was recorded in Glengary, West Virginia.

The storm killed at least 41 people as a result of car accidents, hypothermia, carbon monoxide poisoning or over-exertion from shoveling snow, reported NBC News. At least a quarter of a million people lost electric power because of the storm, and more than 13,000 flights were canceled.

Near-hurricane-force winds and abnormally high tides produced storm surges on the Delaware and New Jersey coasts, which resulted in seawater pouring into coastal towns. There was also extensive beach erosion as far north as Massachusetts, according to USA Today.

Scientists have only begun to study the blizzard, but some researchers suspect the strength of winter storm Jonas may have been amplified by global warming and the record warm temperatures in 2015, said NASA's Earth Observatory in a statement. NASA noted that ocean temperatures in the North Atlantic Ocean have been unusually high this winter, which may have provided a deep well of moisture that was drawn into the storm system.

In general, warmer air masses can carry more water that will fall as either snow or rain, depending on the circumstances, NASA said. If warm air masses continue to be common, it could make extreme snow events more likely in the future, even through overall annual snowfall has been dropping in recent decades, the agency added.