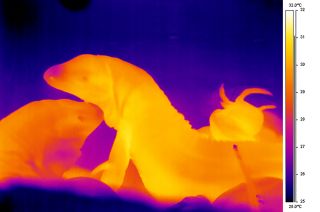 A thermal image of a tegu lizard taken from inside its burrow at 6 a.m.
(Image: © Glenn J. Tattersall)

Although lizards may have a chilly reputation, some species might not stay cold year-round: Tegu lizards can raise their body temperatures during mating season to several degrees higher than the environment around them, new research finds.

That's no small feat for a cold-blooded reptile.

Tegu lizards are not as hefty as the largest living lizards, Komodo dragons, but are still pretty big, measuring from 2.5 to 4 feet (0.8 to 1.2 meters) long. The lizards' native stomping grounds are found throughout South America, and now also in Florida, according to the São Paulo Zoo's website.

As described in the new research, scientists set out to learn more about the body temperatures of tegu lizards during the creatures' hibernation, said Glenn Tattersall, professor of biology at Brock University in Canada and an author on the paper. [The 12 Weirdest Animal Discoveries]

The researchers attached several monitoring devices, such as heart rate and temperature monitors, to lizards living in a small captive colony in a seminatural environment at the São Paulo State University in Rio Claro, Brazil. The monitors recorded measurements on the animals for a year.

The researchers had predicted that the animals' body temperatures would drop during hibernation, but that's not what happened. Instead, the scientists observed an increase in body temperature after hibernation had ended, during the reptile's mating season.

"[The lizards] are actively producing more heat," Tattersall told Live Science. The rise in temperature might not have been an unusual observation if it had been associated with digestion (because other lizards are known to warm up while breaking down large meals), but the tegu lizards began heating up immediately after hibernation, even before they ate, he said.

While it's not yet clear exactly why this happens, Tattersall and his colleagues speculated that something is driving a general increase in the lizards' metabolic rate during this time.

The next step is to find out how this rise in temperature might affect the animals' ability to reproduce. To do this, the researchers plan to compare the temperature measurements with traits associated with reproductive success, such as males' aggressiveness or females' ability to produce eggs, Tattersall said.

The research was published on Jan. 22 in the journal Science.