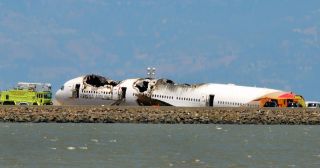 Sixty-three patients, 13 spinal injuries, 15 surgeries, 117 units of blood products and a whopping 370 hours of overtime work for nurses: That's the grim tally of the first 48 hours after the July 2013 Asiana Airlines disaster for one San Francisco hospital.

On July 6, Flight 214 from Incheon International Airport in South Korea crashed just short of the runway at San Francisco International Airport, striking the airport's seawall with its landing gear and tail section. Of the 307 people onboard, 192 were injured, and three died.

It was San Francisco General that received the most patients of any area hospital that day, and doctors are now reporting their experience in the hopes of helping other hospitals prepare for a similar event.

"The day was a surreal experience," said Dr. Rachael Callcut, a surgeon, and the lead author of a new article about the tragedy published today (Jan. 14) in the journal JAMA Surgery. "We prepare and train, as all trauma centers do, for multiple casualty events. Most of us never expect the event will happen in our community, at our centers, in our careers."

Callcut was the backup surgeon at the hospital the day of the crash. The first report of the disaster appeared on Twitter about 30 seconds after the plane skidded to a halt in a stream of smoke on the airport, she said. For doctors at San Francisco General, official notification came from the airport and the county's disaster activation system. [Top 10 Deadliest Natural Disasters in History]

On a summer weekend day, the emergency department staff was already busy (and would treat more than 300 non-airline-crash patients that weekend, according to the hospital). Doctors worked rapidly to triage crash victims, and Callcut quickly took one of the most critically injured — "moments from death," she said — to the operating room for what's called damage control surgery. The goal is to stop bleeding and stabilize patients enough to move them to the intensive care unit so that other critical patients can also be stabilized.

Five patients were severely injured enough that they needed to go directly from the ER to the OR.  All told, the surgical team would complete 39 operations in the first 48 hours after the crash.

Nineteen patients were admitted to the hospital, and another 17 were kept for at least six hours for observation. The most common injury seen among the 63 patients treated at San Francisco General were spinal injuries, similar to those seen in car wrecks, Callcut said: The body is thrown forward, but is restrained by the seat belt, and then thrown back.

There were four traumatic brain injuries, four people treated for smoke inhalation (a fire broke out onboard after the crash) and six people with injuries to their limbs. Four people had fractures to their sternal (chest) bones, and recounted that the seats in the row in front of them had collapsed onto them. There were a handful of bowel and lower-abdominal injuries caused from the pressure of seat belts.

Being restrained undoubedtly prevented more damage than it caused. Two of the three deaths in the Asiana Airlines disaster were teenagers thrown from the plane during the crash. A third teenage girl who died later was likely hit by a door that tore off the plane during the impact, according to the National Transportation Safety Board's report on the accident. She succumbed to multiple injuries at San Francisco General Hospital six days after the crash.

There have been few airline crashes with a large number of survivors in the medical literature, Callcut said. Most commercial jetliner crashes have either killed all onboard, or left everyone shaken but largely unhurt. Overall, fatal commercial airline crashes in the United States are rare. The Asiana Airlines crash was the first in more than four years. (In February 2009, a Colgan Air Inc. plane operating as a Continental connection flight crashed near Buffalo, New York, and killed all 45 passengers and four crew members on board.)

However, mass casualty events of other types, including mass shootings and terrorism, have been on the rise over the past five years, Callcut said. San Francisco General's experience coping with a plane crash can offer lessons about how much donor blood is needed, how many hours of overtime and how to avoid bottlenecks when large numbers of people need computed tomography (CT) scans or other types of medical imaging.

The last patient did not leave the hospital until late October, more than three months after the crash, Callcut said. Many doctors and nurses remain close to the patients they treated, she said.

"It was such an impressionable moment in their lives, and we're grateful that we had the opportunity to help them, both physically and mentally," she said.