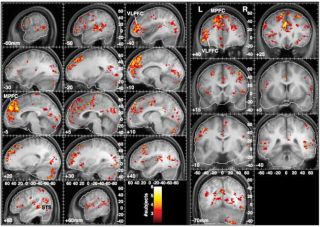 People have long known that music can trigger powerful recollections, but now a brain-scan study has revealed where this happens in our noggins.

The part of the brain known as the medial pre-frontal cortex sits just behind the forehead, acting like recent Oscar host Hugh Jackman singing and dancing down Hollywood's memory lane.

"What seems to happen is that a piece of familiar music serves as a soundtrack for a mental movie that starts playing in our head." said Petr Janata, a cognitive neuroscientist at University of California, Davis. "It calls back memories of a particular person or place, and you might all of a sudden see that person's face in your mind's eye."

Janata began suspecting the medial pre-frontal cortex as a music-processing and music-memories region when he saw that part of the brain actively tracking chord and key changes in music. He had also seen studies which showed the same region lighting up in response to self-reflection and recall of autobiographical details, and so he decided to examine the possible music-memory link by recruiting 13 UC-Davis students.

Test subjects went under an fMRI brain scanner and listened to 30 different songs randomly chosen from the Billboard "Top 100" music charts from years when the subjects would have been 8 to 18 years old. They signaled researchers when a certain 30-second music sample triggered any autobiographical memory, as opposed to just being a familiar or unfamiliar song.

"This is the first study using music to look at [the neural correlates of] autobiographical memory," Janata told LiveScience. His full study is detailed online this week in the journal Cerebral Cortex.

The students also filled out the details of their memories in a survey immediately following the MRI session, explaining the content and clarity of their recollections. Most recognized about 17 out of 30 music samples on average, with about 13 having moderate or strong links with a memory from their lives.

Janata saw that tunes linked to the strongest self-reported memories triggered the most vivid and emotion-filled responses – findings corroborated by the brain scan showing spikes in mental activity within the medial prefrontal cortex.

The brain region responded quickly to music signature and timescale, but also reacted overall when a tune was autobiographically relevant. Furthermore, music tracking activity in the brain was stronger during more powerful autobiographical memories.

This latest research could explain why even Alzheimer's patients who endure increasing memory loss can still recall songs from their distant past.

"What's striking is that the prefrontal cortex is among the last [brain regions] to atrophy," Janata noted. He pointed to behavioral observations of Alzheimer's patients singing along or brightening up when familiar songs came on.

Janata said that his research merely tried to establish a neuroscience basis for why music can tickle memory. He voiced the hope that his and other studies could encourage practices such as giving iPods to Alzheimer's patients – perhaps providing real-life testament to the power of music.

"It's not going to reverse the disease," Janata said. "But if you can make quality of life better, why not?"