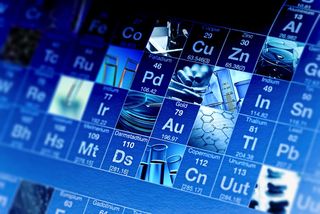 Four new elements will join more than a hundred others on the periodic table of the elements, the International Union of Pure and Applied Chemistry (IUPAC) announced last week. The last time the venerable chemistry mainstay added new elements to its roster was in 2012, when elements 114 and 116 got the names flerovium and livermorium, respectively.

"The chemistry community is eager to see its most cherished table finally being completed down to the seventh row. IUPAC has now initiated the process of formalizing names and symbols for these elements," Jan Reedijk, president of the Inorganic Chemistry Division of IUPAC, said in a statement. [Elementary, My Dear: 8 Elements You've Never Heard Of]

Researchers created the new elements in a lab and then verified that the production could be reproduced. But don't expect to find these elements in nature; scientists produced these "superheavy" elements — which describes all elements with atomic numbers greater than 104 — by blasting beams of heavy nuclei at other nuclei inside particle accelerators. Their existence is fleeting; for instance, element 113 lives for just a thousandth of a second before decaying into other, lighter particles.

Right now, the new elements have placeholder names and symbols that denote the elements' atomic numbers. These values refer to the number of protons in each atom's nucleus; for instance, elements 113 and 115 go by ununtrium (Uut) and ununpentium (Uup), respectively.

Now that the superheavy elements have spots on the periodic table, their discoverers can propose more permanent monikers. But don't expect any far-out or wacky names like "Kittensareawesomium." The IUPAC rules dictate that new elements must be named after a mythological concept, a mineral, a country or other place, a property, or a scientist. Stylistic consistency must also be considered, which is why the elements often have Latin-sounding names, with lots of "iums."

The four elements were produced by several different labs: The RIKEN collaboration team in Japan created element 113, while 115 and 117 were produced via collaborations among researchers at the Joint Institute for Nuclear Research in Dubna, Russia; Lawrence Livermore National Laboratory in California; and Oak Ridge National Laboratory in Tennessee.

Element 118 was actually produced in 2006, but it has taken years to confirm its existence because they are detected indirectly, by the secondary elements they become.

"A particular difficulty in establishing these new elements is that they decay into hitherto unknown isotopes of slightly lighter elements that also need to be unequivocally identified," Paul J. Karol, the chair of the Joint Working Party, the committee that decided the elements' fates, said in the statement. "But in the future, we hope to improve methods that can directly measure the atomic number."

Scientists are already hard at work trying to create elements that would fit into the eighth row of the periodic table. As one moves from left to right along a row on the periodic table, the atomic number increases by 1 with each element, and each successive row has heavier and heavier elements. (Elements in a row, called a period, also share a common feature: They all have the same number of orbital shells where electrons spin.)

"There are a couple of laboratories that have already taken shots at making elements 119 and 120, but with no evidence yet of success," Karol told NPR in an email. "The eighth period should be very interesting because relativistic effects on electrons become significant and difficult to pinpoint. It is in the electron behavior, perhaps better called electron psychology, that the chemical behavior is embodied."