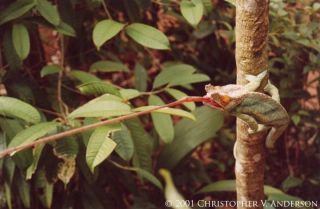 The tiniest chameleons punch higher than their weight class, packing relatively more power into their tongues than their larger relatives.

Small is mighty for these lizards, which can accelerate their tongues toward a cricket at up to 264 times the force of gravity, a new study shows. The top-performing tongues go from zero to 60 mph (nearly 100 km/h) in a mere hundredth of a second, according to new findings published today (Jan. 4) in the journal Scientific Reports.

"It's an example of morphological evolution being driven by metabolic constraints," Anderson told Live Science.

Researchers already knew that chameleon tongues are incredible things. Chameleons don't use muscle power alone to snap at passing flies. Their tongues are anchored by a bone, the hyoid, which has a tubular sheath of muscle wrapped around it, Anderson said. Sandwiched in between the muscle and the bone are elastic connective tissues. Before it flicks out its tongue, a chameleon contracts the tubular muscle, which stretches the elastic tissue like a string on a bow, according to Anderson. The potential energy of these elastic tissues is what gives the chameleon tongue flick its oomph.

However, most previous studies on the physics of chameleon tongues had been conducted on larger species. Small animals tend to be faster and strike harder than larger animals. The predatory mantis shrimp, for example, can accelerate its hammerlike claw as fast as a 0.22-caliber bullet exiting a gun, according to research published in June 2012 in the journal Science.

Anderson used high-speed video to record the tongue-shooting action of 55 individual chameleons of 20 different species, ranging in size from 1.6 inches to 7.8 inches (4 to 20 centimeters) long. He found that these chameleons could project their tongues distances 1.5 times their body lengths, on average, and up to 2.5 times the body lengths of some species. [Video: Watch a Chameleon Snag a Cricket in Slow-Mo]

When smaller is better

He also found that the smaller a chameleon was, the farther its tongue projected from its body, the faster it accelerated and the more power it had.

"Power output — we're talking 14,000 watts per kilogram," Anderson said. That number is a measurement of the rate of energy released by the tongue. For comparison, the peak power seen in vertebrate muscle comes from the beating wings of quails taking off vertically, at a mere 1,100 watts per kilogram. The tongues of salamanders, which are amphibians, have been seen to accelerate faster than the chameleon tongues studied, Anderson said, but the chameleons beat any other reptile, bird or mammal.

It's no surprise that small equals powerful, Anderson said.

"As body size increases, acceleration capacity decreases," he said. "So, small organisms, based on physics alone, are expected to have high accelerations."