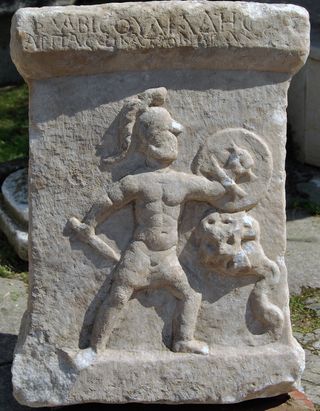 This marble altar, dating to the second century A.D., was discovered near the Akçay River in Turkey. It shows a nude warrior battling a serpent monster. An inscription written in Greek is at top.
(Image: © Photo courtesy of Hasan Malay)

An ancient marble altar showing a nude warrior battling a serpent monster has been discovered by villagers near the Akçay River in Turkey.

Archaeologists said the altar likely dates to the second century A.D., a time when the Roman Empire controlled the area.

The carved scene on the altar is difficult to interpret, archaeologists said. They think it may show a son of Hercules, named Bargasos, fighting a monster in a battle that would bring forth a beneficial river god named Harpasos, to whom the altar is dedicated. At the time of the altar's creation, the Akçay River was known as the Harpasos River. [The 7 Most Mysterious Archaeological Finds on Earth]

"According to [a command in] a dream, Flavius Ouliades set this up to the [river] god Harpasos," the Greek inscription at the top of the altar reads. The altar is 2 feet (0.61 meters) high and 1.5 feet (0.45 m) wide, and is now in the Aydin Museum in Turkey.

The dedication suggests that Flavius Ouliades, the person who created the altar, had a strong belief in the river god, the archaeologists said. "As a result of a communication with the river god Harpasos in a dream, Flavius Ouliades was requested to dedicate an altar," wrote Hasan Malay, a professor at Ege University in Turkey, and Funda Ertugrul, an archaeologist with the Aydin Museum, in an article published recently in the journal Epigraphica Anatolica.

Ouliades may have promised to set up the altar if the river god answered the man's prayers "for a good harvest or protection (for himself or his animals) from flooding or falling down the steep slopes or cure from its healing waters," wrote Malay and Ertugrul.

The nude male warrior is shown wearing a helmet with a crest, holding a dagger in his right hand and round shield in his left. "In the right lower corner is the depiction of a curving snake with many heads," a mythical beast called a Hydra, wrote Malay and Ertugrul.

In ancient mythology, the god Hercules battled a Hydra serpent in a swamp in a region of Greece known as Lerna. After Hercules killed the monster, the swamp could be drained and cultivated to become something beneficial.

However, researchers say that the warrior shown fighting in the carving is not Hercules. Instead, they said, it could be Bargasos, who, in ancient mythology, was the son of Hercules and a woman named Barge. An ancient town in Turkey was named Bargasa in the son's honor.

In ancient mythology the battle depicted on the altar may have led to the creation of the river god Harpasos, researchers say. "The Harpasos valley, with a zone of sand where numerous arms join the river Harpasos, was comparable to Lerna," wrote Malay and Ertugrul.

The "scene on our altar may be a representation of a local myth telling about Bargasos' fight against the ravaging river with many arms," Malay and Ertugrul wrote. After the warrior defeated this monster, "the river turned into a beneficial deity [the river-god Harpasos], the recipient of our dedication."