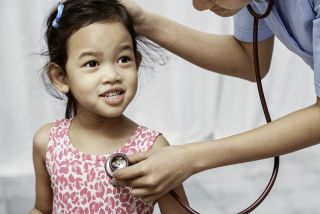 The American Academy of Pediatrics is releasing an updated schedule that details what should happen at each regular office visit for children and teens. The academy says the new schedule reflects recent changes in practice that have occurred over the past two years.

The change that will affect the greatest number of kids is a new recommendation that all children and young adults, ages 11 through 21, should be screened for high blood cholesterol levels at checkups. This recommendation reflects increasing concern about the growing epidemic of obesity in kids, the researchers said.

Obese children and teens are more likely to have high cholesterol, which is a risk factor for heart disease, according to the Centers for Disease Control and Prevention. With childhood obesity on the rise, an increasing number of children are at a risk of high cholesterol levels at younger ages.

One of the most recent changes to the schedule, made in October, drops a recommendation that 18-year-olds undergo routine vision screening. Instead, the new schedule says that only those at risk of vision problems should be screened. Very few vision problems tend to develop in young adults, who seem to have a low risk of having such problems, the researchers said.

Another change is the addition of a recommendation that kids ages 6 months to 5 years receive an application of fluoride varnish on their teeth. This reduces dental cavities, which are common in young children, the researchers said. [10 Scientific Tips for Raising Happy Kids]

Dr. Allison Stakofsky, an attending pediatrician at Cohen Children's Medical Center in New Hyde Park, New York, who was not involved in the new recommendations, said she finds the recommendation about cholesterol screening to be particularly important, because obesity among children and teens is something that pediatricians are "very, very concerned about."

"We are recognizing that obesity is a growing epidemic and trying to make sure that we are providing our patients with the best standard of care," Stakofsky told Live Science.

The authors of the new schedule also added a recommendation that newborns be screened for critical congenital heart disease using a test that measures the levels of oxygen in the blood. This screening should be performed in the hospital before a newborn is discharged, the researchers said.

Among the changes is one that recommends teens between ages 16 and 18 be screened for HIV with a blood test. Statistics show that 1 in 4 new HIV infections occur in young people ages 13 to 24, and that about 60 percent of youth with HIV don't know they are infected with the virus, the researchers said.

Teen girls should no longer be screened routinely for cervical dysplasia, which is the presence of precancerous cells on the surface of the cervix, until they turn 21.

But all young people ages 11 to 21 should be screened for depression, the researchers said, considering that suicide is now a leading cause of death among teens.

Moreover, pediatricians are now recommended to use a special questionnaire called "CRAFFT" (an acronym for key words in the screening questions: Car, Alone, Relax, Forget, Friends, Trouble) to screen teens for the use of drugs or alcohol. The questionnaire consists of six simple questions regarding the use of drugs and alcohol, which a teen can answer "Yes" or "No," according to the Center for Adolescent Substance Abuse Research.

The new recommendations were published today (Dec. 7) in the journal Pediatrics.