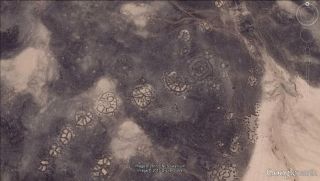 Wheel structures in the Azraq Oasis in Jordan, as seen in this Google Earth image.
(Image: © Image courtesy Google Earth))

Thousands of stone structures that form geometric patterns in the Middle East are coming into clearer view, with archaeologists finding two wheel-shaped patterns date back some 8,500 years. That makes these "wheels" older than the famous geoglyphs in Peru called Nazca Lines.

And some of these giant designs located in Jordan's Azraq Oasis seem to have an astronomical significance, built to align with the sunrise on the winter solstice.

Those are just some of the findings of new research on these Middle East lines, which were first encountered by pilots during World War I. RAF Flight Lt. Percy Maitland published an account of them in 1927 in the journal Antiquity, reporting that the Bedouin called the structures "works of the old men," a name still sometimes used by modern-day researchers.  [See Photos of the 'Nazca Lines' in the Middle East]

The "works of the old men" include wheels, which often have spokes radiating out from the center, kites (stone structures used for funnelling and killing animals), pendants (lines of stone cairns) and meandering walls, which are mysterious structures that meander across the landscape for up to several hundred feet.

The works "demonstrate specific geometric patterns and extend from a few tens of meters up to several kilometers, evoking parallels to the well-known system of geometric lines of Nazca, Peru," wrote an archaeological team in a paper published recently in the Journal of Archaeological Science. (Peru's Nazca Lines date to between 200 B.C. and A.D. 500.)

They "occur throughout the entire Arabia region, from Syria across Jordan and Saudi Arabia to Yemen," wrote the researchers. "The most startling thing about the 'Works' is that they are difficult to identify from the ground. This stands in contrast to their apparent visibility from the air."

New research on the Middle East lines was published recently in the Journal of Archaeological Science and the journal Arabian Archaeology and Epigraphy.  Live Science also got an advance copy of an article set to be published in the journal Antiquity.

Tests indicate that some of the wheels date back around 8,500 years, a prehistoric time when the climate was wetter in parts of the Middle East.

Using a technique called optically stimulated luminescence (OSL), archaeologists dated two wheels at Wadi Wisad, in the Black Desert of Jordan. One wheel dated back 8,500 years, while the other wheel had a mix of dates that suggest it was built about 8,500 years and was remodeled or repaired around 5,500 years ago. [See Aerial Photos of the Giant Wheels]

At the time these wheels were built, the climate in the Black Desert was more hospitable, and Wadi Wisad was inhabited. "Charcoal from deciduous oak and tamarisk [a shrub] were recovered from two hearths in one building dated to ca. 6,500 B.C.," wrote researchers in a forthcoming issue of Antiquity.

Spatial analysis of the wheels showed that one cluster of wheels, located in the Azraq Oasis, has spokes with a southeast-northwest orientation that may align with sunrise during the winter solstice.

"The majority of the spokes of the wheels in that cluster are oriented for some reason to stretch in a SE-NW direction," researchers wrote in the Journal of Archaeological Science. This points to "where the sun rises during the winter solstice."

Whether this alignment was intentional is unknown, researchers wrote in the journal article. "As for the rest of the wheels, they do not seem to contain any archaeoastronomical information."

What were they used for?

The two dated wheels "are simple in form and not very rigidly made, according to geometric standards," said Gary Rollefson, a professor at Whitman College in Walla Walla, Washington. "They contrast sharply with some other wheels that appear to have been set out with almost as much attention to detail as the Nazca Lines."

It's possible that different wheels may have served different uses, Rollefson said. In the case of the two dated wheels, "the presence of cairns suggests some association with burials, since that is often the way of treating people once they died." Rollefson is careful to point out that "there are other wheels where cairns are entirely lacking, pointing to a different possible use."

Rollefson is co-director of the Eastern Badia Archaeological Project. His team is hoping to excavate a few of the cairns, which are located within the wheels, in the next few years.

Visible from the sky

Why people in prehistoric times would build wheel-shaped structures that can't be seen well from the ground remains a mystery. No balloon or glider technologies existed at that time. Additionally, researchers say that climbing to a higher elevation to view them was probably not possible, at least not in most cases. [In Photos: Google Earth Reveals Sprawling Geoglyphs in Kazakhstan]

Though the wheels are often difficult to make out on the ground, they are not invisible. "Granted, one can't see the finished product standing at ground level, but one can still determine a general geometric configuration," Rollefson told Live Science.

He said that to create the more precisely designed wheels, people might have used a long rope and stake.

Wheels located in Saudi Arabia and Yemen look different than those found farther north, a team with the Aerial Photographic Archive for Archaeology in the Middle East (APAAME) has found.

They've been investigating wheels, and other "works of the old men," by using free satellite imagery that is available through Google Earth and Bing. They are also using historical aerial images taken of Saudi Arabia and Yemen during the 20th century.

The circles tend to be small and have only one or two bars instead of spokes, said David Kennedy, of the University of Western Australia, who co-directs the project.  Some of the "wheels" are actually shaped like squares, rectangles or triangles, he said.

One type of wheel structure actually looks like a bull's-eye, according to an image of the structure that Kennedy sent to Live Science. Three triangles point toward the bull's-eye wheel, and there are small piles of stones that lead from the three triangles to the wheel. Kennedy calls it "a central bull's-eye tomb with, in this case, three triangles each with at least a part of a connecting line of stone heaps running to the center."

At present, the archaeologists are not able to conduct fieldwork or aerial imaging (using planes or helicopters) in Saudi Arabia or Yemen.

Another form of "works of the old men," which Kennedy and his team have found in Saudi Arabia, is of structures that he calls "gates."

So far, 332 gates have been found in Saudi Arabia (none are known to exist farther north). The gates "consist of two short thick walls or heaps of stones, between which one or more connecting walls stretch," wrote researchers in an article published recently in the journal Arabian Archaeology and Epigraphy. The researchers note that, "from above, these features resemble an old-fashioned barred gate laid flat." The longest gate is over 500 meters (1,640 feet), but most are much smaller.

Scientists don't know how far back the gates date, nor their purpose. "I coined the term 'gate' for no better reason than that I needed a convenient label to describe them and they reminded me of the sort of field gates I saw all around in my rural childhood in Scotland," said Kennedy.

The researchers found that gates tend not to be located near kites (which were used for hunting). Indeed, some of the gates were built in places, such as barren volcanic slopes, which were unlikely to support large animal herds. Archaeologists found "five [gates] on the outer slopes of the bowl of one of the volcanoes [called Jabal al-Abyad]" in Saudi Arabia, they wrote in the Arabian Archaeology and Epigraphy journal article.

Kennedy said that his team is finishing up its research on the gates and will be publishing another journal article in the future describing the team's findings in greater detail.