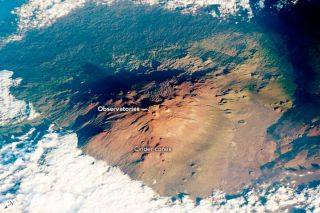 Mauna Kea ("White Mountain") rises 13,796 feet (4,205 meters) above sea level on the island of Hawaii, as seen in this image taken by an International Space Station astronaut on Nov. 1, 2015.
(Image: © NASA Earth Observatory)

Mauna Kea, Hawaii's tallest volcano, is circled by clouds in a photo taken by an International Space Station astronaut. The setting sun cast dark shadows along the volcano’s eastern flank, lending a depth to the image which is unusual in satellite views of Earth.

A tiny ring of white specks at the volcano's summit represents the Mauna Kea astronomical observatory, the largest observatory in the world. Teams of astronomers from 11 countries operate 13 telescopes on Mauna Kea, studying the universe in a range of wavelengths that include optical, infrared, submillimeter and radio.

Mauna Kea's eyes on the skies include the Keck Observatory, Earth's largest optical/infrared telescopes, which took their first images of space — the spiral galaxy NG1232 — from Mauna Kea 25 years ago on Nov. 24, 1990. [Explosive Images: Hawaii's Kilauea Erupts for 30 Years]

Mauna Kea, which means "White Mountain" in Hawaiian, is estimated to be about 1 million years old. It towers 13,796 feet (4,205 meters) above sea level on the island of Hawaii, covering 23 percent of the island's surface. The dry, cloud-free conditions at the summit and the distance from urban light pollution afford unparalleled opportunities for unobstructed telescope observations.

The volcano is so tall that snow accumulates on its summit during winter months, sometimes to depths of nearly 10 feet (3 meters). Mauna Kea last erupted 4,500 years ago, but though the volcano is currently dormant, the possibility of future eruptions persists.

Meanwhile, one of the world's most active volcanoes, Mount Kilauea, lies on the southeastern side of the Big Island, rising some 4,190 feet (1,227 m) above sea level and covering about 14 percent of the island.