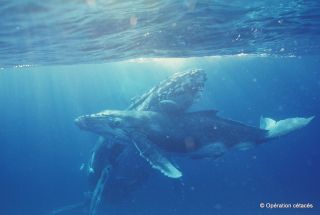 A mother humpback whale and her calf swim on the Antigonia seamount located near the New Caledonian islands in the South Pacific Ocean.
(Image: © copyright Opération cétacés)

Underwater mountains are key stopovers in the migratory routes of an endangered population of humpback whales in the South Pacific, new research shows.

Humpback whales are found in all of the world's oceans, from icy to tropical waters. They migrate farther than any other mammal, traveling great distances from their summer feeding grounds to their winter breeding and birthing grounds. In fact, a record-setting female humpback was recently discovered swimming from Brazil to Madagascar, a voyage of at least 6,090 miles (9,800 kilometers).

Many aspects of humpback migrations remain mysterious, as they mostly occur far away from humans. Previous research had revealed that humpback whales migrating from breeding grounds off the east coast of South America and the west coast of Africa swim in nearly straight lines in the Atlantic Ocean without noticeable stops and in relatively narrow corridors. Similar migration patterns were seen among humpbacks migrating from breeding grounds off Madagascar in the Indian Ocean. [See Photos of the South Pacific Humpback Whales]

Recently, scientists discovered an offshore habitat for southwestern Pacific humpback whales off New Caledonia, an island territory in the South Pacific. To learn more, the researchers tracked these whales with satellite-monitored radio tags.

The scientists approached the whales on boat and used 26-foot-long (8 meters) poles to implant tags into the flanks of whales near their dorsal fins. The researchers photographed the fins and flukes of tagged whales, which are as unique to each of the giants as fingerprints are to humans. The investigators also used a crossbow and custom-made arrows to collect skin samples from the whales, to identify their sex and analyze their genes.

"Tagging whales is a long, hard and difficult process, as you need to come close to the animals," said study lead author Claire Garrigue, a marine biologist at Opération Cétacés in New Caledonia. "Being a few meters from an animal of 14 meters [46 feet] and 30 to 40 tonnes [66,000 to 88,000 lbs.] is very impressive."

The scientists analyzed 34 tags, which transmitted between five and 110 days' worth of data. Unlike previously studied humpback migrations, the tagged New Caledonia whales dispersed in a wide range of routes toward feeding grounds in Antarctica.

Unexpectedly, the satellite data revealed that about three-quarters of the New Caledonia humpbacks paused over seamounts, underwater mountains rising at least 330 feet (100 m) from the ocean floor. Recent studies had revealed that seamounts are one of the largest sets of major habitats in the world, supporting a profusion of life.

For instance, the humpbacks trekked at an average speed of 2.2 mph (3.5 km/h) during most of their migration, but at Antigonia seamount, located near the New Caledonian islands, visitors slowed to about 0.8 mph (1.3 km/h) on average. The average stopover at Antigonia exceeded a week, with the longest lasting more than 22 days. This is the first time scientists have found that humpbacks make regular use of seamounts, and the researchers suggested that these undersea peaks may represent an overlooked habitat for the species.

Seamounts are more common in the Pacific than they are in the Atlantic. This could help explain why these South Pacific humpbacks make use of seamounts whereas previously analyzed humpbacks did not, the researchers said.

The researchers noted that, in the New Caledonia region, there are lots of seamounts but only a few of them seem attractive to humpbacks. Future research can analyze the features of the preferred seamounts and possible functions they could serve for their behemoth visitors, Garrigue said.

Although humpback whales are no longer endangered as a species, the small New Caledonian population of this species is considered endangered. If seamounts are important locations for these humpbacks during their migrations, "conservation measures need to be implemented there," Garrigue told Live Science. "They could, for example, be designed as offshore marine protected areas," she said.

Other species of whale and dolphin — such as Baird's beaked whales, short-finned pilot whales, common dolphins and spinner dolphins — may also make use of seamounts, Garrigue said. Future research can also investigate seamounts outside the South Pacific for visiting whales — "those in the north Pacific, for example, or in the Indian Ocean," Garrigue said.

The scientists detailed their findings online Nov. 25 in the journal Open Science.