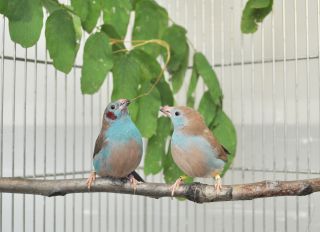 A male red-cheeked cordon-bleu songbird performs his mating "tap dance" to court the gal next to him on their perch.
(Image: © Nao Ota.)

A rapid, invisible tap dance performed by courting songbirds may bring good vibrations to the search for a mate.

With the help of high-speed video, researchers from Hokkaido University in Japan and the Max Planck Institute for Ornithology in Germany have discovered that blue-capped cordon-bleu songbirds (Uraeginthus cyanocephalus) perform foot-stomping step dances during their courtship displays that are too quick to view with the naked eye. Because the birds only start tapping when their potential mates are on the same perch, the study authors think the dancers might punctuate the display with pleasing sounds or vibrations.

Blue-capped cordon-bleus are colorful East African birds with peach-and-white bellies and powder-blue chests and heads. They are monogamous, and both males and females dance, bob and sing when courting, all while holding a piece of nesting material aloft in their beaks. [Video: Watch the Tap-Dancing Birds in Action]

The new study, published today (Nov. 19) in the journal Scientific Reports, is the first to observe the rapid tap dancing. Researchers paired off eight female and eight male birds in cages and recorded their behaviors for 2 hours with high-speed video. In total, seven males and four females did courtship dances during the observation.

Both males and females paired their head-bobbing dance with fancy footwork, the researchers found. Males danced more often, bobbed more quickly and took more steps than females, but otherwise the choreography was similar between the sexes.

The birds tapped faster when sharing a perch with the object of their affection, perhaps as a way to add tactile vibrations to their otherwise visual and auditory display. Unlike humans, the birds might be able to see the footwork as well, the researchers wrote.

"A next step in the study of blue-capped cordon-bleus courtship display should be to investigate how singing, bobbing and stepping behaviors are coordinated within individuals and between partners," they wrote.