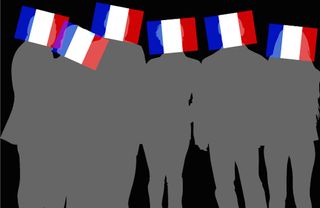 In the aftermath of the coordinated terrorist attacks across Paris last Friday (Nov. 13), support popped up in the new public arena: Facebook. The social network rolled out a tool allowing users to easily put a French flag overlay on members' profile pictures to express sympathy with the victims.

Almost immediately, though, the tool sparked backlash. "Got a French flag on your Facebook profile picture? Congratulations on your corporate white supremacy," read the headline of one op-ed in The Independent.

Emotions are high, to say the least.

The French flag overlay isn't the first overlay Facebook has developed in response to current events, but it came at a time when social media users seem divided on what a retweet, profile picture change or shared meme really means. Is using a Facebook flag overlay a simple act of solidarity, or is it a political statement? Are online expressions of emotion superficial examples of "slacktivism," or are they substantial and meaningful to the political process? [5 Ways Your Emotions Influence Your World (and Vice Versa)]

Research on these social media expressions is still new, as are profile picture overlays themselves. Facebook created a rainbow "Celebrate Pride" overlay in June that became extremely popular after the Supreme Court struck down state prohibitions against same-sex marriage in June. Before that, the Human Rights Campaign designed a red equal sign promoting marriage equality. In March 2013, 3 million Facebook users changed their profile pictures to this logo (which replaced their photo instead of overlaying it). Making a statement via a profile picture is not a phenomenon limited to Facebook. During the 2009 protests in the Middle East known as the "Arab Spring," many Twitter users turned their profile pictures green to support protestors.

The urge to participate in global events through social media is clearly strong. However, there has been little investigation into why some people use Facebook as a political platform while others see it as more of a venue for baby pictures and vacation snapshots. The site does seem to play a role in providing social support, which might explain the urge to reach out and connect after a tragedy. A 2014 study found that for college students, more Facebook use was associated with receiving more social support. However, this social media support was not linked with a greater level of life satisfaction, so it's less clear whether social media support is beneficial to mental health.

There's no consensus on how helpful social media actually is to any given political cause, either. Many in the media trumpeted the value of Twitter to Tehran's "Green Revolution" of 2009, calling it a "Twitter revolution." However, journalist Evgeny Morozov, author of "To Save Everything, Click Here: The Folly of Technological Solutionism" (Public Affairs, 2014) pointed out in an article for Dissent magazine that social media revolutions can backfire, given that the government has access to public communications on Twitter. In fact, these "revolutions" can reveal a great deal about the protestors and how they're connected to one another. And although showing Facebook support for a cause may feel good, it's largely pointless, Morozov argued. [17 Developing Countries That Love Social Media More Than the US]

"What do 100 million people invited to join the Facebook group '100 Million Facebook members for Democracy in Iran' expect to get out of their membership?" he wrote. "Is it just a gigantic exercise in transcontinental wishful thinking?"

Attempting to topple a regime is different from showing solidarity and sympathy, which illustrates the differing motivations behind various social media support campaigns. While green Twitter avatars did little to change Iran's political situation after the Arab Spring, might French flag overlays comfort those directly affected or show unity against terrorism? [10 Ways Terrorist Attacks Have Rocked America]

There are no clear answers to the questions, which are complicated by the rapid backlash to the overlay. Many Facebook users protested that the social media network hadn't reacted as strongly to death and destruction in other countries, including to a suicide bombing that killed 43 in Beirut the day before. Some users have made and shared their own overlays, and are pressuring Facebook to expand its offerings. Founder Mark Zuckerberg has not addressed the flag controversy but said the company plans to offer its "Safety Check" feature — which allows users to let their Facebook friends know they are safe — for more human-made disasters going forward. (Prior to the Paris attacks, this check-in feature had been used only for natural disasters.)

"We care about all people equally, and we will work hard to help people suffering in as many of these situations as we can," Zuckerberg wrote on Facebook.

Facebook's built-in widgets certainly influence how people choose to express themselves on the site, and there is some evidence that the site really can change the real world. Reporting in a 2014 study, researchers found that emotions are contagious on Facebook. When users see more positive posts in their News Feed, they post more positive content themselves, and vice versa for negative posts. And a famous get-out-the-vote study conducted on Facebook on Election Day 2010 found that Facebook encouragement to vote resulted in 340,000 more people going to the polls than otherwise would have. And the effects spread through the network like falling dominoes. For every one person who saw the message, four more were indirectly urged to go to the polls by seeing their friends vote. It was the first study to show that online information can influence a real-world action, the authors of the study told Live Science at the time.

But Facebook is shaped not only by the site's algorithms and tools, but by how a person uses the site. A 2015 study published in the Proceedings of the 18th ACM Conference on Computer Supported Cooperative Work & Social Computing found that people's social milieu strongly influences whether they'll exhibit support for a cause via their Facebook profile photo. The research focused on the Human Rights Campaign red equal sign supporting same-sex marriage. Though support for same-sex marriage had become a majority position in America in the months before the equal sign's appearance, putting it up on one's profile still carried a degree of social risk, the study researchers wrote. Friends or family might disagree, creating conflict, the researchers said.

Perhaps this fear of putting one's neck out too far is why people generally didn't change their profile picture until they'd seen a few friends do so first. On average, people became more likely to change their profile picture after they'd seen eight other friends do so first. (To be precise, the median number was eight, and the mean was 14.4.) Any additional friends getting on the bandwagon after about eight did not further encourage people to adopt the equal-sign profile picture.

Because Facebook users select their own friends, it can be difficult to determine how much the site influences people's beliefs versus locking them in an echo chamber where their pre-existing views are amplified. Unsurprisingly, people with more gay and lesbian friends on Facebook were quicker to change their profile picture to an equal sign than those with fewer gay and lesbian friends.

Facebook's influence in changing the conversation about politics and policy is potentially curtailed by this self-selecting tendency. The site's algorithm tries to show users content they're likely to engage with. A 2015 study found that among 10 million users who'd declared a political affiliation, the algorithm decreased the amount of ideologically different viewpoints those people saw by 1 percent. Users' own choices of what to click on caused a 4 percent decrease in information from different points of view. Facebook has changed its algorithm since that study, possibly exacerbating the effect.

In other words, one person's Facebook feed may be a sea of French flag overlays, while another's might be flooded with shared op-eds on why French flag overlays are wrong. It's not clear how well these messages cut across ideological lines — or whether the cacophony of opinions is capable of changing hearts and minds.