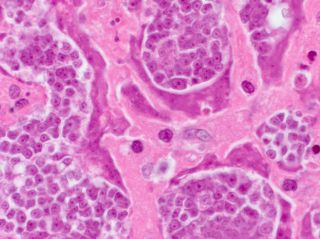 A Colombian man's lung tumors turned out to have an extremely unusual cause: The rapidly growing masses weren't actually made of human cells, but were from a tapeworm living inside him, according to a report of the case.

This is the first known report of a person becoming sick from cancer cells that developed in a parasite, the researchers said.

"We were amazed when we found this new type of disease — tapeworms growing inside a person, essentially getting cancer, that spreads to the person, causing tumors," said study researcher Dr. Atis Muehlenbachs, a staff pathologist at the Centers for Disease Control and Prevention's Infectious Diseases Pathology Branch (IDPB).

The man had HIV, which weakens the immune system and likely played a role in allowing the development of the parasite cancer, the researchers said. Although the man's case is probably a rare one, the researchers noted that both tapeworms and HIV affect millions of people worldwide, "so there may be more cases that are unrecognized," Muehlenbachs said. [10 Deadly Diseases That Hopped Across Species]

The 41-year-old man first went to doctors in Colombia after experiencing a fever, cough and weight loss for several months. The man had been diagnosed with HIV more than 10 years earlier, but was not taking his medications.

A CT scan showed tumors in his lung and lymph nodes, but biopsies of these tumors revealed bizarre cells, leading Colombian doctors to contact the CDC for assistance in diagnosing the man.

The cells, when examined under a microscope, acted like cancer cells — they multiplied quickly and crowded together. But the cells didn't appear to be human, they were 10 times smaller than human cancer cells.

After a number of tests, the researchers found DNA from a type of tapeworm called H. nana in the man's tumor. This result was surprising, the researchers said, because the cells did not look at all like tissue from a tapeworm. But further tests confirmed that the cells were indeed from H. nana.

The researchers hypothesized that, because the man had HIV, the tapeworm kept growing in the body, unchecked by the immune system. Eventually, mutations developed in the tapeworm's cells that turned the cells cancerous.

The patient died just 72 hours after researchers determined that the tumors were caused by H. nana.

H. nana is the most common tapeworm in humans, infecting up to 75 million people worldwide at any given time.

If researchers do find other cases like the Colombian man's, it's not clear what type of treatment would help. Drugs that treat tapeworm infections may not be able to treat cancer cells from tapeworms, the researchers said. But it's possible that human cancer treatment might also work against parasite cancer cells.

The study is published in today's (Nov. 5) issue of the New England Journal of Medicine.