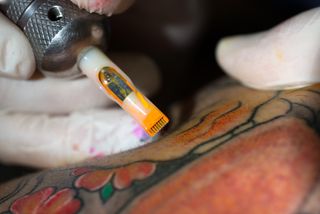 People who get tattoos need better instructions on how to properly care for their skin afterward, and most states need stronger guidelines for tattoo artists about this topic, a new opinion paper suggests.

Only seven states in the U.S. — Alabama, Arkansas, Delaware, Louisiana, Massachusetts, Michigan and North Dakota — have strong policies, requiring that licensed tattoo artists provide customers with instructions on tattoo "aftercare" that has received prior approval from state public health officials, the skin care experts wrote. Such instructions can prevent skin infections after a person gets inked, according to the paper, published online today (Nov. 4) in the Journal of the American Medical Association (JAMA) Dermatology.

Dermatologists are caring for an increasing number of people who come to them with skin infections after getting a tattoo, said Dr. Jared Jagdeo, a dermatologist at the University of California, Davis Health System in Sacramento and a co-author of the paper. There is a need for better information on the topic for the general public as well as the doctors who treat them, he said. [16 Oddest Medical Cases]

Whether they are visible on the body or concealed with clothing, tattoos have become increasingly popular. At least 21 percent of Americans have one or more tattoos, according to the paper.

However, because obtaining this body art involves sharp instruments that puncture the skin and release blood, the skin may become infected if the procedures are not done safely.

Surveys of people in the U.S. who have recently gotten a new tattoo have found that about 3 percent of them developed a skin infection from it, and about 4 percent of people had at least one short-term complication, such as pain, infection or itching.

"Actual skin-infection rates from tattoos may be higher," Jagdeo told Live Science. And there may be regional differences in infection rates, he noted. Larger studies are needed to understand what problems may be cropping up, he said.

Currently, regulations for tattoo parlors are made at the state or local level, so the requirements vary by state or location, according to the paper.

The regulations may include requiring tattoo artists to wear gloves and be trained in sterile techniques to prevent infections, and for the parlor to properly dispose of blood and report adverse reactions.

The paper also calls for better oversight on the national level to ensure the safety of the inks and procedures used when people get tattoos.

Seven states have no laws requiring that tattoo artists be licensed, and six states require artists to be licensed but have no laws stating that tattoo customers be given aftercare instructions. In 30 states, tattoo artists are required to be licensed and to provide some type of either written or verbal guidance to customers to prevent complications from their new tattoo, but that guidance is not subject to any approval process, according to the paper. (The remaining seven states have strong policies, according to the paper.)

The paper also urged skin-care experts to create a set of safety standards for tattoo aftercare that could be used by state public health departments and tattoo artists. This would make customers more aware of the possible skin reactions that may develop after they get a tattoo and tell them how to properly care for their skin.

In the meantime, Jagdeo offered the following tips:

When the tattoo is completed, cover the area with a thin layer of white petroleum ointment and a bandage. Remove the bandage one day later, wash the area with soap and water, and pat it dry with a soft cloth. Do not scrub skin with a washcloth, sponge or loofah, and resist the desire to scratch or pick at the skin.

Every day until the area fully heals, gently wash skin, pat it dry and apply a thin film of petroleum ointment. Avoid using an antibacterial ointment because it may cause an allergic skin reaction, Jagdeo said.

It may take two to four weeks for skin to heal completely.

If a person notices any signs of infection, irritation (or redness) that lasts longer than one day, or scarring, he or she should see a physician, preferably a dermatologist, as soon as possible, he said.