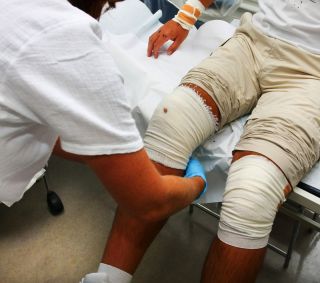 In the movies, superheroes' and vampires' wounds heal so quickly that life-threatening cuts and gashes close up in minutes. These super healing abilities may be out of reach, but researchers in Switzerland have now engineered a substance called a growth factor that makes cuts and broken bones heal more quickly, by remaining near the damaged tissue longer than it would naturally.

This engineered growth factor could benefit people with chronic wounds, including those with diabetes or compromised immune systems, according to the researchers, whose work is detailed in the Feb. 21 issue of the journal Science.

Growth factors are proteins that animals produce naturally; they are at work in processes ranging from fetal development to the healing of cuts and broken bones. When an injury happens, growth factors signal certain types of cells to come to the injury site, and help heal the wound. Skin cells, for example, release growth factors after a cut occurs to stimulate cell growth and the reformation of blood vessels.

Growth factors are already used in the treatment of wounds, certain kinds of bone injuries and even dentistry. But it's hard to get the growth-factor proteins to stick where they are needed. [5 Crazy Technologies That Are Revolutionizing Biotech]

In the study, researcher Mikaël Martino and colleagues at the École polytechnique fédérale de Lausanne (EPFL) in Switzerland decided to look at how growth factors bind to the stuff that surrounds all human cells, called the extracellular matrix. They altered a growth factor called placenta growth factor-2, and attached a set of chemical "hooks" to it that allowed the protein to stick to the matrix.

The researchers tested their growth factor on mutant mice, which carry a genetic defect that makes it harder for their wounds to heal. The mice were wounded, and then the growth factor was essentially painted on.

With the growth factor stuck in place, other cells got the message to help fix the injury, and the damage healed more quickly, the researchers found.

The ability to stick in place means that this growth factor could be applied to wounds in smaller doses — the scientists were able to use amounts up to 250 times smaller than any used before.

Smaller dosage is an important consideration, said Jeffrey Hubbell, a professor of bioengineering at EPFL and a co-author on the study. One problem with using growth factors in treatments so far has been that they sometimes go into overdrive.

"You get bone formation where you don't want it," Hubbell said. Growth factors used in wound healing can stimulate blood-vessel growth, but if the doses are too large, they cause the vessels to become too permeable, resulting in bruises.

Hubbell noted that the work is still in its early stages. The next step is to do tests on larger animals, especially for bone treatments, he said.

Piyush Koria, a professor of chemical and biomedical engineering at the University of South Florida, said this kind of study could help get more growth-factor treatments into clinics.

"[Clinical researchers] all mention that delivery has been a big issue," Koria said. Such treatments could also help treat burn victims, he said. One reason even small third-degree burns are so hard to treat is that the cells that would release growth factors are simply not there anymore, Koria said.

As promising as the new study is, Koria said, he is still cautious. Despite years of research, there are only two growth factors now used in clinical treatments, he said, adding that designing treatments with growth factors is tricky.

But if it does work, then doctors will have one more tool to help patients heal, making some types of reconstruction, such as skin grafting, easier. "Sometimes the wound is so large… I'd rather not have to do that," Hubbell said.