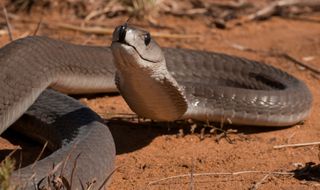 The black mamba is one of the fastest and deadliest snakes in the world. Two drops of its venom can kill a person.
(Image: © Andre Coetzer | Shutterstock)

There is an urgent need for better and more accessible snakebite treatments in Africa, which cause thousands of deaths each year, researchers argue.

Recently, the antivenom manufacturer Sanofi-Pasteur made headlines when it said it would stop producing the snakebite treatment. But even before this announcement, experts note that the product didn't reach many of the people bitten by snakes in Africa, said David Williams, head of the Australian Venom Research Unit at the University of Melbourne, writing in the editorial. "The reality is that for the vast majority of Africa's snakebite victims, the loss of Sanofi's antivenom will mean little, if anything at all," Williams wrote.

The antivenom was too expensive, and the company made only enough to meet the needs of a small number of bite victims in Africa, he said.

Between 900,000 and 1.5 million people in sub-Saharan Africa are bitten by snakes each year, according to the estimates of a study published in 2011 in the journal Toxicon. Researchers estimate that up to 25,000 people in the region die from snakebites per year.

"Most people are unaware that snakebite is a very real and serious threat both to the health and economic vitality of rural communities throughout much of the developing world," Dr. Alan J. Magill, president of the American Society of Tropical Medicine and Hygiene, said in a statement in 2014.

There is a shortage of safe, effective and affordable treatments for snakebites on the African continent, Williams said in an editorial, published today (Oct. 27) in the journal BMJ. "For decades, there have been chronic gaps in antivenom supply globally that have cumulatively cost millions of lives, maimed millions more and contributed to the burden of poverty," he said. [Image Gallery: Snakes of the World]

Many efforts to change this situation have failed, Williams said. For instance, initiatives to educate people on ways to prevent snakebites have not become large enough, and treatment guidelines authored by leading experts have not reached local healthcare workers, he added.

Throughout most of sub-Saharan Africa, people who get snakebites are still mainly treated by traditional healers, Williams said.

Another problem for snakebite victims is what Williams called "snake oil sales representatives," who are unscrupulous people who take advantage of poor regulations and introduce imitations and poorly tested alternatives for antivenom, he said. For example, the use of unsafe, ineffective antivenom in Chad resulted in an increase of mortality rates among snakebite victims, from about 2 percent to about 15 percent, according to a 2006 study cited in the new editorial. National regulatory agencies need a greater capacity to assess antivenom products, Williams said.

Moreover, with the cost of antivenom treatment ranging from $56 to $640, "there is huge potential for snakebite to drive patients and their families into deeper poverty and debt," Williams said.

Williams called for action from the World Health Organization and health ministries of countries whose populations that are particularly affected by snakebites. The ministries "can no longer ignore their responsibility to their citizens," he said.