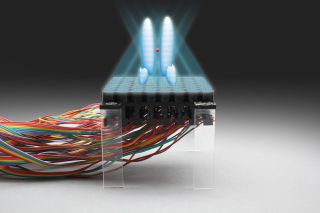 Researchers recently created an acoustic hologram, or a 3D sound field projected onto a 2D space, which can be used as acoustic tweezers, cages and twisters that manipulate objects as they levitate in air.
(Image: © Image courtesy of Asier Marzo, Bruce Drinkwater and Sriram Subramanian © 2015)

It may seem straight out of "Star Trek," but it's real: Scientists have created a sonic "tractor beam" that can pull, push and pirouette objects that levitate in thin air.

The sonic tractor beam relies on a precisely timed sequence of sound waves that create a region of low pressure that traps tiny objects that can then be manipulated solely by sound waves, the scientists said in a new study.

Though the new demonstration was just a proof of concept, the same technique could be adapted to remotely manipulate cells inside the human body or target the release of medicine locked in acoustically activated drug capsules, said study co-author Bruce Drinkwater, a mechanical engineer at the University of Bristol in the United Kingdom. [Watch the Tractor Beam Levitate Objects]

In the past, scientists have used everything from laser beams to superconducting magnetic fields to levitate objects. And in 2014, researchers at the University of Dundee in Scotland showed that acoustic holograms that act like a tractor beam could theoretically suck in objects.

"They really just showed the force was there; they weren't able to grab or pull anything," Drinkwater said.

The principle behind the new system is simple: Sound waves, which are waves of high and low pressure that travel through a medium such as air, produce force.

"We've all experienced the force of sound — if you go to a rock concert, not only do you hear it, but you can sometimes feel your innards being moved," Drinkwater told Live Science. "It's a question of harnessing that force."

By tightly orchestrating the release of these sound waves, it should be possible to create a region with low pressure that effectively counteracts gravity, trapping an object in midair. If the object tries to move left, right, up or down, higher-pressure zones around the object nudge it back into its low-pressure, quiet zone.

But figuring out the exact pattern of sound waves to create this tractor force is difficult, scientists say; the mathematical equations governing its behavior can't be solved with a pen and paper.

So Drinkwater, his Ph.D. student Asier Marzo and other colleagues ran computer simulations through myriad different patterns of sound waves to find the ones that produced the signature combination of a low-pressure region surrounded by high-pressure zones.

They found three different acoustic force fields that can twirl, grab and manipulate objects. One works like tweezers and seems to grab the particles in thin air. Another traps the object in a high-pressure cage. The third type of force field acts a bit like a swirling tornado, with a rotating high-pressure field surrounding a low-pressure, quiet "eye" that holds the object in place, the researchers report today (Oct. 27) in the journal Nature Communications.

To accomplish this task, the team used a tiny array of 64 mini loudspeakers, made by a company called Ultrahaptics, that produce exquisitely timed sound waves with accuracy to the microsecond level. Past acoustic levitation systems have used two or four arrays of these transducers to essentially surround the system, but the researchers' models allowed them to create the same force field using just one array. The team demonstrated their tractor beam using tiny balls of polystyrene, the same material used in packing peanuts.

The size of the low-force region depends on the wavelength: The longer the wavelength, the larger the region of low pressure. The sound intensity determines the maximum density of an object that can be pushed and pulled by the acoustic force, Drinkwater said.

"I think, if you pointed this device at a dog, it would hear it for sure," Drinkwater said. "It wouldn't like it; it would run away."

The team currently levitates lightweight polystyrene balls that measure up to 0.2 inches (5 millimeters) across. But for the system to be useful for medical operations, the team would need to miniaturize it to manipulate objects on the micron scale. Doing so would mean using higher-frequency sound waves — a relatively simple tweak, Drinkwater said.

"The fact that we do it as a one-sided system is so important," Drinkwater said. "To get at the body, you have to apply it to one side."