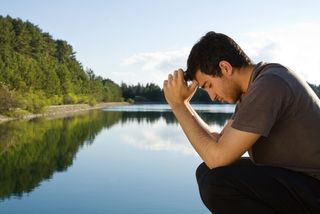 Religion and science may be naturally at odds, but being anti-science? Well, that's mainly a problem with those other people.

That seems to be the view of most Americans, according to new survey data.

A majority of Americans see religion and science as frequently at odds, but two-thirds of Americans say their own personal beliefs do not conflict with science, according to a new survey conducted by the Pew Research Center.

"It is the least religiously observant Americans who are most likely to perceive conflict between science and religion. But that perception is not closely tied to their own religious or supernatural beliefs," study co-author Cary Funk, associate director of research on science and society at the Pew Research Center, said in a statement.

The fact that the people least likely to hold religious views are most likely to see a clash between faith and science "suggests the perception of conflict is rooted in assumptions about other people's beliefs," she added.

The new survey was based on a nationally representative sample of 2,002 individuals who were called on their landlines and cellphones in August 2014.

Approximately 1 in 6 people with no religious affiliation said their beliefs were in conflict with science. About 40 percent of evangelical Christians saw a conflict between the two. Overall, the number of people who saw a clash between their faith and science fell, from 36 percent in 2009 to just 30 percent in 2014.

"Where people do see a conflict, it has to do with evolution and the creation of the universe," Funk told Live Science.

But step back from issues like evolution or the Big Bang, and the stark divides along religions lines disappear. For instance, religious people are just as likely as the unaffiliated to accept climate change, to support space exploration, to see genetically modified foods as safe and to support the use of bioengineered tissues in humans, the study found. A January study published in the American Sociological Review found that well-educated religious people are just as scientifically literate as their agnostic and irreligious counterparts — they just selectively reject theories that conflict with their deeply held beliefs.

"Our analysis points to only a handful of areas where people's religious beliefs and practices have a strong connection to their views about science topics and a surprising number of topics where religious differences do not play a central role in explaining their beliefs," Funk said.