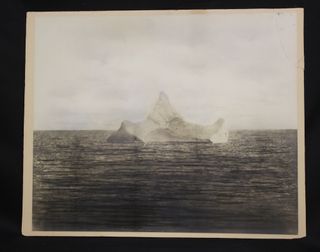 The famous image of the iceberg that allegedly sank the Titanic.
(Image: © Henry Aldridge and Son)

A photo of what could be the notorious iceberg that sunk the Titanic is up for auction this weekend, but experts are unsure whether the historic snapshot actually shows the destructive iceberg, or simply one that was floating in the vicinity at the time of the accident.

On the morning of April 15, the SMS Prinz Adalbert liner passed by the site. The liner's chief steward took a photo of an iceberg with three crownlike points and an odd red streak on it, possibly from the Titanic's hull, he wrote in a note accompanying the photograph. [Image Gallery: Stunning Shots of the Titanic Shipwreck]

"On the day after the sinking of the Titanic, the steamer Prinz Adalbert passes the iceberg shown in this photograph," the chief steward wrote in a message to commemorate the event. "The Titanic disaster was not yet known by us. On one side red paint was plainly visible, which has the appearance of having been made by the scraping of a vessel on the iceberg. SS Prinz Adalbert Hamburg America Line."

The chief steward and three other crewmen signed the message, said Andrew Aldridge, an auctioneer and valuer with Henry Aldridge and Son, the company handling the auction.

Hamburg America Lines originally gave the photo to its attorneys, Burlingham, Montgomery & Beecher, when it learned that the firm would be defending the Titanic's company, White Star Line, in court. The photo hung in the firm's office for nearly 90 years, from 1913 until 2002, when the firm closed.

However, this isn't the only photo that could show the Titanic's iceberg.

"There are two photos of icebergs from the area on the day following the collision, both of which purport to be the Titanic iceberg," said Grant Bigg, an environmental scientist at the University of Sheffield in England.

Moreover, it's likely that the fatal iceberg came from one of Greenland's southern glaciers, Bigg discovered.

During his research, Bigg learned about the two iceberg photos. The other, taken by Captain William George Squares de Carteret of the SS Minia, is from a U.S. Coast Guard archive, he said.

Surviving passengers who saw the deadly iceberg later gave its approximate dimensions. These reports roughly match the dimensions of the iceberg in Carteret's photo, measuring about 394 feet long by 98 feet high (120 m by 30 m), Bigg said.

"I personally think the Carteret photo is the more likely candidate," largely because of the shape and dimensions, Bigg told Live Science.

Aldridge agreed that there's "no definitive answer" about which iceberg is the true culprit. "What's interesting with this one is the provenance of the lot," he said, referring to the photo's accompanying note, the evidence of the red streak and its history with Hamburg America Lines and White Star Line.