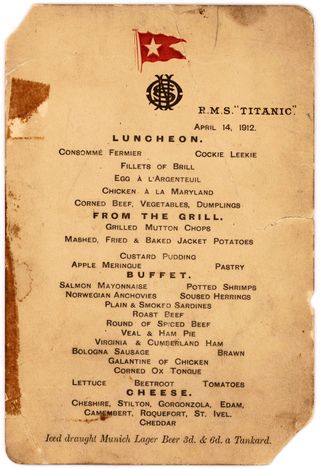 The last lunch menu from the Titanic was recently sold at auction.
(Image: © Lion Heart Autographs)

A piece of paper that sailed aboard the Titanic was recently sold at auction for the price of a fancy sports car.

The yellowed document — a luncheon menu for the first-class dining room — is dated April 14, 1912. This means that it details the last-ever gourmet lunch served aboard the ill-fated luxury ocean liner. The menu reveals that, the day before the boat sank to the bottom of the icy North Atlantic Ocean, wealthy passengers dined on "grilled mutton chops," soused herring and a variety of other delicacies.

The menu was put up for auction last week(Sept. 30), and the 103-year-old piece of paper was expected to bring in about $50,000. But an anonymous buyer shelled out significantly more than that — a whopping $88,000 — for the strange souvenir. Although the identity of the buyer is unknown, he or she may be a descendent of one of the 700 or so people who survived the catastrophic shipwreck, according to Lion Heart Autographs and Invaluable.com, the auction houses that handled the sale. [Image Gallery: Stunning Shots of the Titanic Shipwreck]

The salvaged menu once belonged to Abraham Lincoln Salomon, a passenger who dodged death by boarding the infamous Lifeboat No. 1. Nicknamed the "Money Boat," Lifeboat No. 1 could have held 40 people, but it floated away from the sinking ship carrying just 12 people — seven crewmen and five first-class passengers. In the wake of the shipwreck, rumors swirled that the wealthy passengers on the lifeboat bribed the crewmen to row away from the Titanic rather than take on more people.

Salomon had the carte du jour tucked in his jacket pocket when he boarded the lifeboat. He was also carrying a ticket from the ship's Turkish baths weighing chair (a chair that recorded the sitter's weight). That tiny piece of paper was inscribed with the names of three of the other passengers aboard Lifeboat No. 1: Miss Laura Mabel Francatelli, Sir Cosmo Duff-Gordon and Lady Lucy Duff-Gordon.

The bath ticket was also sold during the recent auction, for $11,000. Another document, a letter that Francatelli sent Salomon six months after the Titanic sank, went for $7,500.

In addition to the Titanic memorabilia, the auction featured many other items with storied pasts. For example, a collection of 170 letters written by the infamous CIA double agent Aldrich Ames, who has been imprisoned for espionage since 1994, sold for $9,000. A letter that Albert Einstein wrote to an advice-seeking man in Florida went for $4,000. Einstein advised the man not to seek a career in mathematics.

Also among the historical artifacts sold was a royal edict, dated December 1494, written on behalf of King Ferdinand and Queen Isabella of Spain. The document, which sold for $7,000, warned Spanish subjects about the dangers and legal consequences of "playing dice and cards."