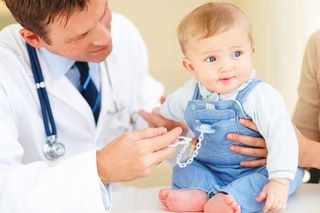 When children are prescribed antibiotics that they don't need, doctors often point to pressure from parents, saying that they demand the drugs for their kids.

But a new study suggests that this may not be the case with parents whose kids are sick — and, in fact, many parents are cautious about giving the drugs to their children.

In the study, the researchers interviewed more than 100 parents in Pennsylvania who took their children to the doctor for symptoms of a respiratory infection, like a cough or cold. Before the parents met with the doctor, the researchers asked them about their view of antibiotics and whether they planned to ask for the drugs. The parents were from a variety of educational and racial backgrounds.

None of the parents said they had planned to ask the doctor for antibiotics at the visit, the researchers found.

Instead, most parents said they wanted to learn what was wrong with their child, and that they trusted their doctors' advice on treatment, the study found. Most parents didn't have a strong opinion about antibiotics, but some were hesitant to use the drugs, describing them as "a necessarily evil."

Study co-author Julia Szymczak, a postdoctoral fellow at The Children's Hospital of Philadelphia who studies medical sociology, said she was surprised by the results. "The overwhelming wariness [towards antibiotics] was a real surprise," Szymczak said. [6 Superbugs to Watch Out For]

In a prior study, Szymczak and colleagues asked pediatricians why they sometimes prescribed antibiotics when they are not necessary — for example, when a child's infection is caused by a virus, which won't be helped by antibiotics. Most doctors cited parents' demand for the drugs.

But the new findings suggest that, for doctors, "parents may actually be your ally," in efforts to use antibiotics only when they are needed, Szymczak said. "It may not take much for you to partner with parents to wisely use antibiotics," she added.

The overuse of antibiotics is a problem because over time, it can promote the evolution of strains of bacteria that are resistant to the drugs.

It's not clear why doctors say they feel pressure from parents to prescribe antibiotics, when parents appear to be cautious about using the drugs.

But doctors often have only a short amount of time to spend with their patients during each appointment, and the time pressure that doctors feel could contribute to a misperception of parents' attitudes.

"When you feel rushed and pressured, you are going to jump to conclusions about somebody that you wouldn't if you had more time," Szymczak said.

Szymczak noted that most parents "want reassurance that their child is not gravely ill, or that the symptoms that they're experiencing are going to resolve."

Providing doctors with a tool kit of words or phrases to help reassure parents might be one way to reduce unnecessary antibiotic use, Szymczak said.

Szymczak presented the study this month at IDWeek 2015, a meeting of several organizations focused on infectious diseases.