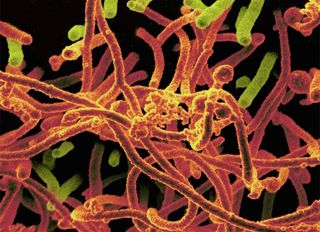 In a speech Wednesday (Oct. 7), Crozier provided his unique perspective on the devastating illness, from the point of view of a doctor who treated patients in West Africa who also became a patient himself. He described his struggle with not only the viral illness but also the numerous health complications that have appeared in the months since he was declared Ebola-free.

"It ain't over, even when it's over," Crozier said here at IDWeek 2015, a meeting of several organizations focused on fighting infectious diseases. [10 Deadly Diseases That Hopped Across Species]

Crozier also discussed unanswered questions about post-Ebola complications, and the need to develop ways to diagnose and treat these problems.

Crozier, who was born in Zimbabwe and later became a U.S. citizen, volunteered to treat Ebola patients in Sierra Leone in August 2014. But in early September, he developed a fever and headache, and tested positive for Ebola. Crozier was soon evacuated to Emory University Hospital in Atlanta, where he spent six weeks fighting for his life. His organs were failing, and he required a ventilator to breathe and kidney dialysis, according to Emory University.

After more than 40 days of treatment, Crozier's condition improved, and he was released from the hospital after doctors no longer detected Ebola in his blood.

But soon, he developed other symptoms, including severe back pain, hearing loss and tinnitus (a constant ringing in the ears).

Crozier also experienced cognitive symptoms, including problems with his short-term memory, he said. Two months ago, he had a seizure while attending a wedding in England, and started taking an anti-epileptic drug.

"I added this to a long list [of symptoms] in my survivor's portfolio," Crozier said.

One of his most notable complications was serious eye problems — his vision was blurry, he saw halos around objects, and felt pain and increased pressure in his left eye. At one point, his eye even changed color, from blue to green.

Doctors found Ebola virus in the aqueous humor — the fluid between the eye's outer covering and the lens. Even 100 days after he was released from the hospital, "the virus was teeming in the anterior chamber of my eyes," Crozier said.

Today, his vision has improved, although it's not back to where it was before his illness, Crozier said. (Although the virus was found in a part of his eye, Crozier, along with other Ebola survivors, would not be able to spread the virus to other people through casual contact.)

Questions remain, including how Ebola is able to "hide" in certain parts of the body, including the eye, without being detected by the immune system. "How does a pathogen hijack that space?" he said.

Crozier has since returned to West Africa, where there have been reports of survivors experiencing a range of eye problems. "There's an immediate need" to develop ways to diagnose and treat people who have eye problems after Ebola, he said.

An upcoming study called PREVAIL III aims to look at the health consequences of Ebola, including the burden of eye disease in survivors. "I hope you're thinking about West African eyes," Crozier told the audience.

After the conclusion of his speech, Crozier received a standing ovation.