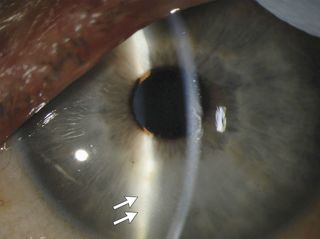 Ebola survivor Dr. Ian Crozier developed eye problems months after he recovered from the viral illness. Above, an image of Crozier's eye taken with an instrument that shines a thin beam of light onto the eye.
(Image: © The New England Journal of Medicine ©2015)

An American doctor who recovered from Ebola developed serious eye problems months later because the virus had lingered in his eye, according to a new report of his case.

Dr. Ian Crozier, now 44 years old, contracted Ebola in September 2014 while treating patients in Sierra Leone. Crozier's eye problems were so serious that he nearly lost his vision, but his sight has since recovered, according to the new report, which Crozier co-authored.

"This case highlights an important complication of [Ebola virus disease], with major implications for both individual and public health that are immediately relevant to the ongoing West African outbreak," the researchers wrote in the report, published online today (May 7) in The New England Journal of Medicine.

Shortly after Crozier became ill in Africa, he was evacuated to Emory University Hospital in Atlanta, where he received intensive treatment, including being placed on a ventilator for 12 days and undergoing dialysis for kidney failure for nearly a month.

After more than 40 days of treatment, his condition improved. He was declared Ebola-free and was released from the hospital.

But he soon began to experience eye problems, including a burning sensation and the feeling that there was something in his eye, according to the report. He also needed a new prescription for his reading glasses. Following an eye exam, Crozier was diagnosed with uveitis, an inflammation of the uvea, or the middle tissue layer of the eye.

One month later, about nine weeks after he had been declared Ebola-free, Crozier had new eye symptoms, including redness, blurred vision with halos and pain, and increased pressure in his left eye. He was started on treatment with eye drops to reduce the eye inflammation, and drugs to lower the pressure in his eye. [What Are the Long-Term Effects of Ebola?]

But his symptoms continued to worsen over the next few days, so his doctors performed a procedure to remove fluid from his eye, and tested it for the Ebola virus.

They found that a sample from the aqueous humor — the fluid between the eye's outer covering and the lens — tested positive for Ebola. However, samples of Crozier's blood, tears and conjunctiva tissue (which lines the eyelid and white part of the eye), tested negative for Ebola.

Over the next five days, Crozier's eye inflammation continued, and he experienced some vision loss. Three days later, the inflammation improved, but he still had severe vision impairment in his left eye.

Three months after his first diagnosis with eye inflammation, his condition had improved and he had recovered his vision, the researchers said.

Crozier's eye problems were likely a direct effect of the Ebola virus, which persisted in the eye fluid despite being cleared from most of the body, the researchers said. (Another place where Ebola can persist after recovery is in the semen.)

It's reassuring that the Ebola virus was not found in parts of the eye that could come into contact with others, such as tears and the conjunctiva, the researchers said. This finding "supports previous studies suggesting that patients who recover from [Ebola virus disease] pose no risk of spreading the infection through casual contact," the researchers said.

Future studies are needed to assess how the Ebola virus is able to persist in certain sites in the body, the researchers noted.