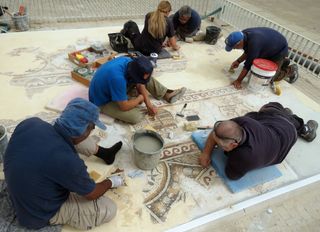 A mosaic map of an ancient Egyptian settlement is going on display where it was found — in an industrial-park parking lot in Israel.

The Israel Antiquities Authority announced today (Sept. 29) the first public display of the elaborate mosaic, which was discovered two years ago. Dating back to the Byzantine period, the mosaic shows streets and buildings arranged like a map. A Greek inscription reveals that the map shows Chortaso, Egypt, the site of the burial of Habakkuk, a prophet in the Hebrew Bible.

This mosaic graced a church floor some 1,500 years ago, archaeologists said in a statement. Today, it sits in the midst of an industrial park in the city of Kiryat Gat (also spelled Qiryat Gat) in Israel. [See Images of the Byzantine Church-Floor Mosaic]

"The appearance of this Egyptian city on the floor of the public building in Qiryat Gat might allude to the origin of the church's congregation," Israel Antiquities Authority archaeologists Sa'ar Ganor and Rina Avner said in the statement.

The church structure itself is long gone, but the floor mosaic remained. With funding from the company that manages the industrial park where it was discovered, archaeologists carefully excavated and removed the mosaic for conservation two years ago. Now, they have returned the ancient artwork to its original place. It will open for public display on Oct. 1 during a "Factories from Within" festival at the industrial park.

The mosaic is made of 17 different colors of tile. It depicts birds, a rooster and a deer in one surviving fragment, as well as a goblet filled with red fruit. The second fragment shows the Egyptian settlement, complete with roads, buildings and a boat with a sail. Each building is two or three stories tall and carefully detailed; galleries, balconies, windows and even roof tiles are depicted.

"The investment in the raw materials and their quality are the best ever discovered in Israel," the archaeologists wrote.

Though Christian tradition places Habakkuk's resting place in Chortaso, the final burial place of this minor prophet is unknown — both Israel and Iran now claim sites said to be the prophet's tomb. The Byzantine period of Israel, however, was a time of elaborate church construction. Intricate floor mosaics are often part of the designs of these houses of worship. The Byzantine Empire stretched from the "toe" of the boot of Italy through modern-day Greece and Turkey and down into today's Syria, Lebanon and Israel. It flourished from the collapse of the western half of the Roman Empire (often estimated to be around A.D. 476) until 1453.