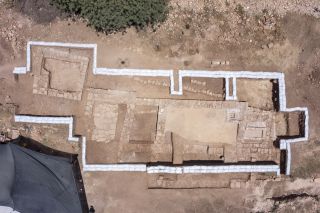 Aerial view of the excavation in Jerusalem.
(Image: © Skyview Company, courtesy of the Israel Antiquities Authority)

A 1,500-year-old church has been discovered at a Byzantine period rest stop on the road connecting Jerusalem and Tel Aviv, archaeologists announced today (June 10).

The ancient road station and church, uncovered during a highway construction project, sit next to a seep spring called 'Ain Naqa'a, which is on the outskirts of Moshav Bet Neqofa, a settlement in Jerusalem.

Along the old road, which was likely paved in the Roman period, "other settlements and road stations have previously been discovered that served those traveling the route in ancient times," Annette Nagar, the director of the excavation on behalf of the Israel Antiquities Authority, said in a statement. "This road station ceased to be used at the end of the Byzantine period, although the road beside which it was built was renewed and continued to be in use until modern times."

The newly excavated church had a white mosaic floor measuring about 52 feet long (16 meters), with a side chapel 21 feet by 11 feet (6.5 m by 3.4 m). A baptismal font ("baptisterium"), which is a fixture that can hold water for baptisms, sat in the chapel's northeast corner. It was in the shape of a four-leaf clover, reminiscent of the cross. [Photos: Peering Into a 12th-Century Byzantine Monastery]

Remaining fragments of red-colored plaster found mixed in with the rubble throughout the building suggest the church walls were decorated with frescoes. Rooms on the west side of the church could have provided housing and storage, the researchers noted. Pottery tiles filled one of the rooms.

Various artifacts at the site — such as oil lamps, coins, special glass vessels, marble fragments and mother-of-pearl shells — indicate the site was used for many activities.

Pablo Betzer, the Israel Antiquities Authority's district archaeologist for Judah, added, "The finds have been documented, and we shall be studying them."

Uncovering the ancient past is not uncommon in Israel, an archaeologically rich region where plenty of construction projects have revealed artifacts and ruins. For instance, archaeologists digging trenches on the side of Israel's Highway 38 in preparation for a road widening discovered a 10,000-year-old house that is considered one of the region's oldest dwellings. A salvage excavation last year, before construction of an interchange on southern Israel's Highway 31, turned up a Byzantine monastery near the Bedouin village of Hura in the northern Negev Desert.

In other finds, a 900-year-old wealthy estate complete with a garden and mosaic fountain emerged during excavation ahead of bridge construction along Israel's Highway 44, and a Stone-Age carving of a phallus was discovered during a project to expand Highway 1 in Israel.