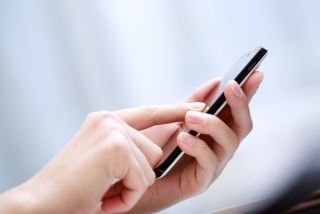 The health of heart disease patients might be improved by technology they're already carrying around in their pockets: cellphones.

In a recent study, patients with coronary heart disease enrolled in a program to receive four text messages weekly on their cellphones, encouraging them to make heart-healthy lifestyle choices. Exercise more, put down the salt shaker, quit smoking — these were just a few of the messages that the 352 patients may have received over the course of the six-month study. For comparison, a separate group of patients with coronary heart disease didn't receive any text messages about their heart health.

At the end of the study period, the group that received texts had lower levels of low-density lipoprotein ("bad") cholesterol, lower blood pressure and lower body mass indexes (BMI), on average, than the control group. The patients who received texts about their heart health were also more likely to have quit smoking, and were more likely to report an increase in their level of physical activity, the researchers found. [7 Foods Your Heart Will Hate]

The study, which researchers dubbed the "TEXT ME" (short for Tobacco, Diet and Exercise Messages) trial, is one of many recent attempts by heart disease researchers to leverage technologies that patients use every day, like cellphones, in the fight against cardiovascular disease.

Although thousands of apps exist to help patients monitor their heart health, few controlled studies have been conducted to test how well such apps really work, said Dr. Zupin Eapen, an assistant professor of medicine at Duke University in North Carolina and a co-author of an editorial scrutinizing the new study. Both the editorial and the study were published today (Sept. 22) in the Journal of the American Medical Association (JAMA).

"Well-conducted randomized clinical trials like TEXT ME demonstrate that mobile health interventions, even simple ones, can influence patient behaviors and improve risk profiles in the short term," Eapen and his co-authors wrote. Other text-messaging trials promoting things like weight loss and smoking cessation have shown equally as promising results, they added.

However, even though the TEXT ME trial showed promise for using technology to fight heart disease, Eapen and his co-authors pointed out that the study had a few limitations. For one thing, it was conducted at a single location in Australia, instead of a variety of sites across the country. It isn't clear if the results would apply to people living elsewhere.

In addition, many potential participants had to be excluded from the TEXT ME trial because of language barriers, or because they didn't own a cellphone, Eapen said. The idea of using text messages to improve the risk factors for heart disease requires "future evaluation in broader settings and patient populations," the editorial authors wrote.